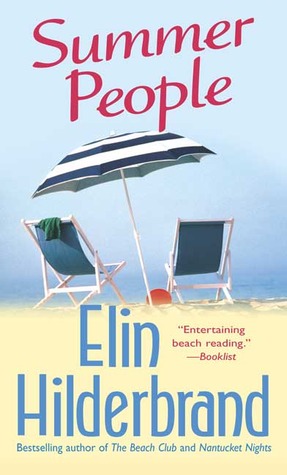 Every summer the Newton family retreats to their beloved home on Nantucket for three months of sunshine, cookouts, and bonfires on the beach. But this summer will not be like any other. When Arch Newton, a prominent New York attorney, dies in a plane crash on his way home from a business trip, his beautiful widow Beth can barely keep things together. Above all, though, she decides that she must continue the family tradition of going to Nantucket, and at the same time fulfill a promise that Arch made before he died.

Beth invites Marcus, the son of Arch's final and most challenging client, to spend the summer with her and her teenage twins Winnie and Garrett, who have mixed reactions to sharing their special summer place with this stranger. Always a place of peace before, Nantucket becomes the scene of roiling emotions and turbulent passions as Marcus, Winnie, and Garrett learn about loss, first love, and betrayal. And when they stumble upon a shocking secret from Beth's past, they must keep it from destroying the family they've been trying so hard to heal.

Summer People was disappointing. I couldn’t relate to any of the characters. I found them self-absorbed, selfish and unrelatable. If I have to say which is the character that irritated me the least, I would have to go with Marcus. He had his moments but for the most part, he was ok.

Summer People is about the Newton family. Arch Newton, the father, has recently perished in a plane crash while flying back home after a business meeting.

Beth is the mother and she has teenager twins, Winnie and Garrett. Arch was a famous lawyer. Before dying, he had taken a case where a woman had murdered two people, one of them a child. Arch was defending her pro bono. Arch had developed a friendship with the accused's teenage son, Marcus and he has invited him to Nantucket to spend the summer with his family. Then, Arch's plane crashes without any survivors.

In the aftermath, Beth decides to take her family and Marcus to Nantucket just as Arch had planned to do. All of them are overwhelmed with grief. Beth is lost without Arch and she's not sure how to deal with her own children. She knows Garret is always angry and Winnie is refusing to eat and wearing Arch's shirt every day. Also, Garrett is against bringing Marcus but Winnie is excited about befriending him. Marcus is upset that his mother has committed this horrendous crime and escaping from NYC to Nantucket with this rich family is something he welcomes. Then Dave and his two daughters, make an appearance. Dave is part of Beth's past. At first, she wants to avoid him but later on, she won't be able to do so. As the summer unfolds, Garrett is taken by Piper and he wants to spend as much time with her as he possibly can.

There were so many things I dislike about this book. Beth, Winnie, and Garrett were all self-centered. Beth likes the idea of David loving her and giving him hope, to later on, backpedaling from his advances. Then, there was Garrett's "love" for Piper and him saying he couldn't live without her until something happens and then he couldn't run away from her fast enough. Winnie whining all the time and acting like a brat. In my eyes, both children did something unforgivable and I couldn't believe Beth let it go without a bigger scene.

I had loved so many books by Elin Hilderbrand but Summer People is not one of them.