Something About You (FBI / US Attorney #1) by Julie James 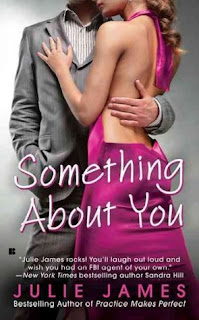 Assistant U.S. Attorney Cameron Lynde is trying to catch up on some sleep in a hotel room. Through the walls she can hear a couple having sex. Later on, she is awakened by noise in the next room. She goes to the peep hole but the only thing she sees is a man with a hoodie leaving through the stairs exit. She calls the hotel line to complain. Security comes up and finds the body of a female. She soon finds out a politician had been next door and she has become the star witness for his defense. The FBI makes their appearance, and no other than Jack Pallas shows up.
Jack and Cameron have a history. Three years ago, he told the world that she "had her head up her ass" after she was told not to prosecute a certain mafia criminal. Jack had been captured and tortured when his undercover operation was discovered by this same criminal.
Because of his actions, he is transfered to a different state. Now, just recently relocated to Chicago, the last thing he wanted was to see Cameron again.
As fate will have it, now they have to be together and he is in charge of her protection. Sparks are flying between them.
Great book, with great characters.
4/5 Fangs
Posted by MrsLeif at 5:33 PM

Email ThisBlogThis!Share to TwitterShare to FacebookShare to Pinterest
Labels: Review Cameron Lynde, FBI / US Attorney, Jack Pallas, Julie James, Something About You