About That Night by Julie James
FBI / US Attorney #3 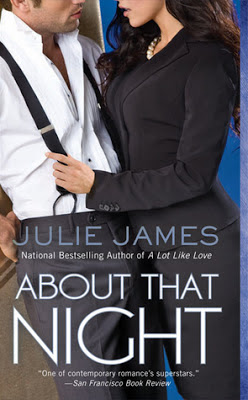 
Rylann Pierce has relocated to Chicago. She moved from California when her ex-boyfriend moved to Italy. She has a new job under U.S Attorney Cameron Lynde (from book 1).

Nine years ago Rylann met Kyle Rhodes (Jordan's twin book 2) in a bar and he walked her home. They set a date for the next day, which Kyle never showed up because his mother was killed in an accident.

Nine years later Kyle is known as the Twitter Terrorist for shutting down twitter after his ex-girlfriend broke up with him in a tweet and then posted a video of her with another guy. There may have been some alcohol involved in his decision. He was sent to prison but thanks to his sister helping the FBI on a case, he was released earlier.

Now, the FBI/U.S. Attorney's office needs his help. He may have heard some communication between a prison guard and an inmate, The inmate lost his life by a white supremacist inmate. His death may have been ordered by the prison guard.

Kyle is trying to pick up the pieces of his life and start a new company. When Rylann asks for his help he can't deny her. He remembers her and wants more of her.

Kyle is referred to as "Sawyer" from Lost- so you have to love him just for that.

Has great hair, which he gets teased for.

The secondary characters a great here too.