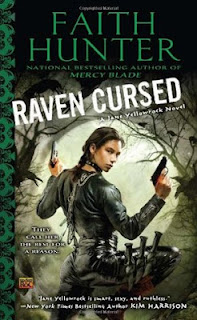 This installment begins with Jane going to Asheville, NC as a bodyguard. She is taking care of the security between the meetings involving Gregoire, sent by the MOC from New Orleans (Leo Pellissier) and the master vampire who wants his own clan to claim a territory.
Also, Evil Evie is making deals and using her powers for no good. This puts a strain in Jane's friendship with Molly.
Also, she is dealing with Rick's betrayal and at the same time trying to help him shift. He may die if she doesn't find a way to help him.
Worse of all there are rogue werewolves on a killing spree. They are trying to get Jane's attention. So in her spare time, Jane is helping the police find the rogues. Her life is in danger multiple times but thanks to Beast she always has an ace up her sleeve.
Let's just say that I found this book lacking something...hmmm...oh I know- BRUISER. Why can't we get more Bruiser. I know Jane is probably going to end up with Rick, but I want Jane to explore her relationship with Bruiser further. As secondary characters,  the twins did a great job.
3.5/5 Fangs
Posted by MrsLeif at 5:24 PM