Other Birds by Sarah Addison Allen 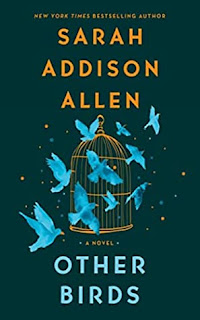 An enchanting tale filled with magical realism and moments of pure love that won’t let you go.
Between the real and the imaginary, there are stories that take flight in the most extraordinary ways.
Right off the coast of South Carolina, on Mallow Island, The Dellawisp sits—a stunning old cobblestone building shaped like a horseshoe, and named after the tiny turquoise birds who, alongside its human tenants, inhabit an air of magical secrecy.
When Zoey comes to claim her deceased mother’s apartment on an island outside of Charleston she meets her quirky and secretive neighbors, including a girl on the run, two estranged middle-aged sisters, a lonely chef, a legendary writer, and three ghosts. Each with their own story. Each with their own longings. Each whose ending isn’t yet written.

Other Birds was precious! Magical realism at its best!
Zoey Hennessey finds herself moving from Tulsa to Mallow Island in South Carolina. She'll be there until she starts college. The condo was left to her by her mother, Paloma who died when she was young.
Paloma used to love going to Mallow Island and Zoey is hoping to find out more about her mother at the Dellawisps.  The building's name comes from the small turquoise birds that inhabit the courtyard. On her arrival, the apartment manager, Frasier takes her to her condo and Zoey realizes there is nothing left behind by her mother.  Yet, her disappointment is not long-lasting.
Zoey will get to know the other owners of the condos including Charlotte (henna artist), Mac (chef), Lizbeth (eccentric, hoarder), Lucy (Lizbeth's sister and a recluse), Frasier, and Lizbeth's son. The readers will also meet the ghosts too.
It was a sweet story despite the painful background of each character. I love Zoey's innocence and the way she is able to connect with all the other characters. In a way, she helps them heal and move forward, with some of them finding romance too.
Cliffhanger: No
4/5 Fangs
A complimentary copy was provided by St. Martin's Press via Netgalley in exchange for an honest review.
Posted by MrsLeif at 6:55 PM