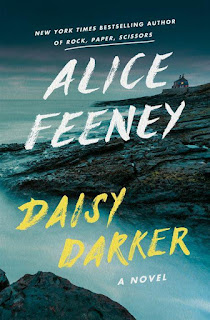 After years of avoiding each other, Daisy Darker’s entire family is assembling for Nana’s 80th birthday party in Nana’s crumbling gothic house on a tiny tidal island. Finally, back together one last time, when the tide comes in, they will be cut off from the rest of the world for eight hours.
The family arrives, each of them harboring secrets. Then at the stroke of midnight, as a storm rages, Nana is found dead. And an hour later, the next family member follows…
Trapped on an island where someone is killing them one by one, the Darkers must reckon with their present mystery as well as their past secrets, before the tide comes in and all is revealed.
With a wicked wink to Agatha Christie’s And Then There Were None, Daisy Darker’s unforgettable twists will leave readers reeling.

You gotta love a book in homage to Agatha Christie's And Then There Was One.
Daisy Darker died and was resuscitated several times before she reaches the age of thirteen. She was found to have a heart condition as a child and spent her life growing up being treated differently for it.
Some of her best times, she spent with her grandmother at Seaglass. A home you can reach easily during low tide, but quite a different story when the tide is high.
Daisy is going back to Seaglass for her Nana's 80th birthday. Nana is an eccentric woman who has written many children's books. Her most-known novel is Daisy Darker's Little Secret. She has a wall full of clocks for every year she has lived. She dresses only in pink and purple and she loves Daisy very much. This birthday is special because many years ago, she was told by a fortune teller that she wouldn't live past eighty.
The story is told in the past and present. Daisy narrates both timelines.
In the past, we learned how Daisy was treated by her family. In the present when the clock strikes midnight, a scream is heard and Nana is found dead. A poem on the wall tells them that each of them will die before morning and the family can't leave because of the high tide. Discovering who is behind the attack before they are all dead is their number one priority.
I guessed the main twist at the very beginning. However, I still enjoyed it greatly and I was able to navigate through the plot with my eyes fully opened. My favorite character was Daisy and I was rooting for her.
Cliffhanger: No
4/5 Fangs
Posted by MrsLeif at 7:10 PM