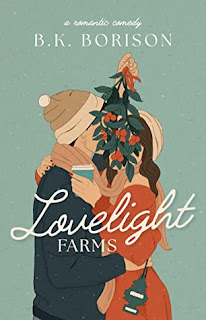 A pasture of dead trees, a hostile takeover of the Santa barn by a family of raccoons, and shipments that have mysteriously gone missing—Lovelight Farms is not the magical winter wonderland of Stella Bloom’s dreams.
In an effort to save the Christmas tree farm she’s loved since she was a kid, she enters a contest with instafamous influencer Evelyn St. James. With the added publicity and the $100,000 cash prize, she might just be able to save the farm from its financial woes. There’s just one problem. To make the farm seem like a romantic destination for the holidays, she lied on the application and said she owns Lovelight Farms with her boyfriend. Only there is no boyfriend.
Enter her best friend Luka Peters. He just came home for some hot chocolate, and somehow got a farm and a serious girlfriend in the process.
Lovelight Farms is a romantic comedy featuring a handsome freckled data analyst, a messy, optimistic Christmas-tree-farm owner, and a small town with the best hazelnut lattes on the east coast.
This sweet and steamy romance is a holiday happily ever after and the first book in a series of interconnected standalones following the three Lovelight owners.

The farm was sweet and charming!
We all know the story of best friends who fake being a couple, right?  The question is does it work for Lovelight Farms?
The answer is a Yes!!
The story is sweet and perfect for the holidays!
Luca and Stella have been friends for a decade. Stella is in love with Luca but she doesn’t want to lose what she has with him in case he doesn't feel like she does. The loss of her mother almost destroyed her and she can't count on her father. She only sees him once a year for a Thanksgiving dinner that is done way before the date just so he doesn't have to explain a child he had outside his marriage to anyone else.
Stella doesn’t want to lose what she has with Luca but in order to keep the farm afloat, she enters herself into a contest with an influencer. In the contest paperwork, she said she owned the farm with her boyfriend and now she is in desperate need of a fake boyfriend. Who better than Luca to fill the place! To her shock, Luca is more than agreeable to be it.
Can Stella keep her heart in check or is her heart going to be broken by the end of the influencer's visit?
Adorable characters. I Love Luca and his mom. Lovelight Farms had a small-town feel with all the positives. Stella’s friends were both great. The kittens 🐈‍⬛ were so cute!!!
Pippa Jayne did a great job narrating this book.
I can’t wait to read the next book.
Cliffhanger: No
4/5 Fangs
A complimentary copy was provided by Dreamscape Media via Netgalley in exchange for an honest review.