The Woman on the Pier by B.P. Walter 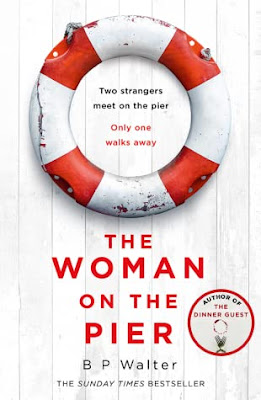 Two strangers meet on the pier. Only one walks away…
Screenwriter Caroline Byrne is desperate to know why her daughter Jessica died, murdered in Stratford when she was supposed to be at a friend’s in Somerset.
When Caroline discovers the messages Jessica had been sending a boy named Michael, she realises it’s because of him. Because he failed to meet her that day.
He’s the reason why her daughter is dead.
And so she makes a choice. He’s the one who’s going to pay.
That is her promise. Her price.
Set between Essex, Kent, and Australia, The Pier is a dark suspense thriller brimming with secrets and lies seeping across three generations. A must-read for fans of Lucy Foley and Rosamund Lupton

This was disappointing in all ways possible!
Caroline Byrne is devastated when her daughter Jessica is murdered during an Isis attack. Caroline doesn't understand why her daughter was in Stratford when she was supposed to be at Somerset.
Why did her daughter lie?
Then Caroline opens her daughter's phone and she starts reading a thread her daughter had with another teenager. Caroline couldn't believe what she read and she knew she has to do something about it.
But is she ready to go too far?
To mention a few issues I had with this book:
-It was extremely hard to relate to Caroline who was all over the place. I couldn't respect her. She was spineless and felt entitled because she had money. I hated what she did at the end.
-I didn't really like any of the characters: The husband, the mother, etc.
-The whole TV issue was completely unnecessary. It brought nothing to the plot.
-Lastly, the name of the book has nothing to do with the book.
Cliffhanger: No
2/5 Fangs
A complimentary copy was provided by One More Chapter via Netgalley in exchange for an honest review.
Posted by MrsLeif at 11:58 AM