The Way We Weren't by Phoebe Fox 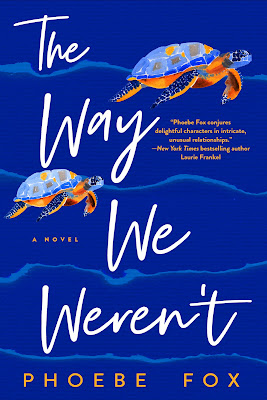 An unlikely friendship between a septuagenarian and a younger woman becomes a story of broken trust, lost love, and the unexpected blooming of hope against the longest odds.
You trying to kill yourself, or are you just stupid?
Marcie Malone didn't think she was either, but when she drives from Georgia to the southwestern shore of Florida without a plan and wakes up in a stranger's home, she doesn't seem to know anymore. Despondent and heartbroken over an unexpected loss and the man she thought she could count on, Marcie leaves him behind, along with her job and her whole life, and finds she has nowhere to go.
Herman Flint has seen just about everything in his seventy years living in a fading, blue-collar Florida town, but the body collapsed on the beach outside his window is something new. The woman is clearly in some kind of trouble and Flint wants no part of it--he's learned to live on his own just fine, without the hassle of worrying about others. But against his better judgment, he takes Marcie in and lets her stay until she's on her feet on the condition she keeps out of his way.
As the unlikely pair slowly copes with the damages life has wrought, Marcie and Flint have to decide whether to face up to the past they're each running from and find a way to move forward with the people they care about most.

Do you ever feel like you want to leave your life behind and drive away without looking back?
This is what Marcie Malone chooses to do. She recently had a loss in her life and the day that she has to return back to work, she decides to start driving. She gets on the interstate and leaves Georgia for sunny Florida.
Herman Flint is an old man. He is a loner and doesn't interact much with anyone else. To his discontent, he finds a woman passed out on the beach in front of his home. At first, he doesn't want to get involved thinking she is just another junkie but when the woman remains in the same spot, he decides to check on her and takes her inside his house to recuperate.
Marcie is confused at first to find herself in a house she doesn't recognize. Once she meets grumpy Herman, she decides to leave but then she changes her mind. She is not ready to go back to Georgia. She needs time to heal and think about what she wants for her future. Herman agrees for her to stay while she begins this new chapter in her life.
This was heartwarming!
I liked both of the main characters. Marcie was reinventing herself in a way. She was recognizing all the things she gave up through her adulthood and how she would like to move forward. On the other hand, Herman had closed himself to life and Marcie invading his space was the best thing that could happen to him. The addition of the turtles to the story was wonderful for someone who enjoys seeing turtle nests at the beach. Lastly, I loved the ending. It's full of hope.
Cliffhanger: No
4/5 Fangs
A complimentary copy was provided by Berkley Books via Netgalley in exchange for an honest review.
Posted by MrsLeif at 7:12 PM