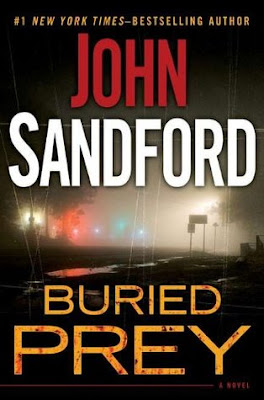 A house demolition provides an unpleasant surprise for Minneapolis-the bodies of two girls, wrapped in plastic. It looks like they've been there a long time. Lucas Davenport knows exactly how long.
In 1985, Davenport was a young cop with a reputation for recklessness, and the girls' disappearance was a big deal. His bosses ultimately declared the case closed, but he never agreed with that. Now that he has a chance to investigate it all over again, one thing is becoming increasingly clear: It wasn't just the bodies that were buried. It was the truth.

Probably one of my favorite in this series.
On Buried Prey, we get to meet Lucas when he was just a young man. He is getting bored with his job as a patrolman and he is either thinking of climbing the ladder or leaving and going to law school instead. We see that Lucas was a womanizer and his love for good clothes was present already there but also his skill for digging into an investigation and tying the details together to find his target.
Lucas finds himself assisting in the investigation of two young girls who have gone missing. All clues point to a homeless man but Lucas believes there might be more to the story.
In the present, the bodies of both girls had just been discovered and Lucas knows he needs to catch the real killer before he does it again.
Most of the time, I'm not a fan of going back in time but I think John Sanford did an outstanding job at it. It was a blast meeting young Lucas and learning more about his aspirations, his love of the chase, his early manipulative behaviors as well as meeting a younger Del.
Even though this is one of my favorites, there is a great loss in this one. So be prepared.
Cliffhanger: No
5/5 Fangs
Posted by MrsLeif at 11:46 AM