Ship of Magic by Robin Hobb
The Liveship Traders #1 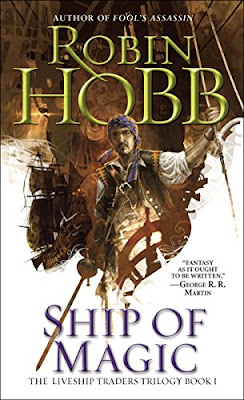 Wizardwood, a sentient wood.The most precious commodity in the world.
Like many other legendary wares, it comes only from the Rain River Wilds.
But how can one trade with the Rain Wilders, when only a liveship fashioned from wizardwood can negotiate the perilous waters of the Rain River? Rare and valuable a liveship will quicken only when three members, from successive generations, have died on board. The liveship Vivacia is about to undergo her quickening as Althea Vestrit’s father is carried on deck in his death-throes. Althea waits for the ship that she loves more than anything else in the world to awaken. Only to discover that the Vivacia has been signed away in her father’s will to her brutal brother-in-law, Kyle Haven...
Others plot to win or steal a liveship. The Paragon, known by many as the Pariah, went mad, turned turtle, and drowned his crew. Now he lies blind, lonely, and broken on a deserted beach. But greedy men have designs to restore him, to sail the waters of the Rain Wild River once more.

After finishing The Assassin's Quest, I was ready to put a brake on the series and squeeze a few other audios before I resumed it. That thought lasted about 3 minutes before I dived back into the world of the Six Duchess and now Bingtown.
At the core of the storyline, we have the Vestrit family. They own the ship Vivacia which is made of wizardwood. In order for Vivacia to quicken, three successive generations have to die on board the ship.
Althea, the youngest daughter, dreams of inheriting the ship. She has a connection with it. Her father, Ephron Vestrit, knows it. However, her mother Ronica and sister, Keffria have other plans. They want Kyle Haven, her bother in law to take over the ship.
During her marriage, Ronica had stayed behind taking care of the household and their holdings while Ephron left trip after trip onboard the Vivacia. She was the one who met with the Rain Wild Traders and kept her side of their bargain. One thing Ronica was clear on, was that Ephron didn't want to take his boat into the waters of the Rain River in order not to make their debt even a higher one with the Rain Wild people.
Keffria has let her mother and her husband do what they thought was right. Yet, when Kyle was last back, she realized she might have made a mistake and now her family would suffer for it.
Wintrow, Kyle's young son, only wants to continue on his journey to becoming a priest of Sa but his father wants him on the Vivacia instead.
Keffria's daughter, Malta, is a spoiled young girl who only thinks about being introduced at the ball, seeking the attention of young boys, and owning pretty things.
Brashen Trell, a man who is a good sailor who was part of the Vivacia crew until Kyle took it away from him. He is probably Althea's HEA.
Paragon, the Pariah. A Liveboat who went mad. He is blind and stuck on the beach. But for how long?
Amber, a newcomer to Bingtown with a special knack for handling and modifying wood.
Pirate Kennit, who would like to become the King of Pirates and his other desire is to capture a Liveship. He has luck on his side but maybe not all the time.
Of course, there are others that help with the characterization like Kennit's First Mate and the woman he cares for but won't admit it to himself.
Ship of Magic had the best ingredients to earn and keep my attention. A good storyline with credible characters despite the fantasy elements and the wish that I could meet them somehow and be able to help them. Although maybe not on a ship at sea on treacherous paths while serpents are following us and trying to eat us.
Yes, SoM's audio was long, a little more than thirty-five hours but worth it because now I know more of Bingtown and its dynamics. It made me laugh when they say the inhabitant of the north (Six Duchess) are all barbarians. I also have my suspicions about Amber. I do like Pirate Kennit as an anti-hero and I would like to see Paragon sailing again. I'm sure Malta will be in trouble and she will hopefully mature into someone who cares more for other things than jewels. So far, Wintrow and Althea have had the worst luck.
I'm excited to see what happens next.
Cliffhanger: Yes
4/5 Fangs
Posted by MrsLeif at 9:33 PM