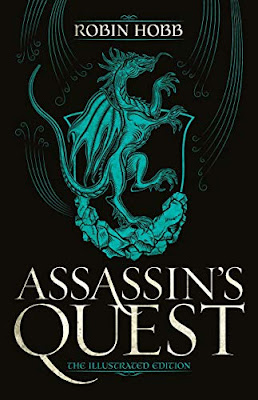 Fitz is about to discover the truth about the Fool's prophecy. Having been resurrected from his fatal tortures in Regal's dungeons, Fitz has once more foiled the Prince's attempts to be rid of him.
Now, restored to his own body, Fitz begins the painful, slow process of learning to be a man again. He must learn to cast off the wild ways of the wolf and return to the human world: a world beset evermore by the relentless Red Ships Raiders who are now free to plunder any coastal town they please. But more immediately, a world in which Fitz finds he is utterly alone.
Regal has stripped the kingdom of its riches and retired to the inland city of Tradeford. Of Verity, on his quest to find the legendary Elderlings, there has been no word; Molly, Kettricken and the Fool have all vanished.
Unless Fitz can find Verity and help him in his quest, the Six Duchies will perish and there will be no safe place to live.

Short of thirty-eight hours, this audio was exactly what I was expecting. I knew from a friend (ok ok, it was my husband) that the end of this book wouldn't be completely satisfying. So I was ready to be upset at poor Fitz's fate. Yet, when the ending happened, I was more impressed than anything else. What an amazing world Robin Hobb has created! I couldn't be anything but in awe of her writing. Her characters are so well crafted and developed that I was lost to her world. It also helped that I knew there was way more Fitz in other books and this was not the end of him and his troubles.
As the name of the book implies, our Fitz has a rude awakening after what happened at the end of the second book. Fitz is back, he is not a boy anymore and for a while, he wants to break free of his duty, he wants to seek revenge. He wants to run free like a wolf and do with his life as if it was his own to command. But was it truly a quest of self-discovery or was it Fate guiding him?

In the end, Fitz does what he must. He must look for Verity and if that means searching for him in the most inhospitable places, he will do it but not without getting hurt but gaining knowledge and wisdom in the process. We also get some glimpses of Chade, Burrock, Molly, Nettle, and Patience thanks to the Skill.
Luckily, the last leg of his traveling is not done alone. The Fool, Kettricken, and Nighteyes are with him. Also, Starling, who was not a favorite of mine and I wasn't sure why she had to be there but having the other ones there and knowing that at least someone knew that Fitz was alive and what had happened to him made me happy.
Even though, I've told you I thought Robin Hobb did an amazing job at creating this world, my huge issue with her is what she did to Fitz. It's almost as she enjoyed writing his misfortunes over and over again. This young man has suffered and lost so much! How much pain and suffering does the main character have to endure before he can be happy in the end? I guess the long answer to my question will be:
Sixteen books.
Cliffhanger: No
4/5 Fangs
Posted by MrsLeif at 9:31 PM