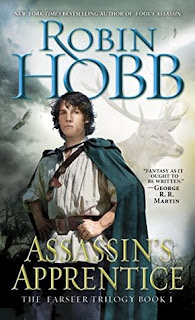 Young Fitz is the bastard son of the noble Prince Chivalry, raised in the shadow of the royal court by his father's gruff stableman. He is treated like an outcast by all the royalty except the devious King Shrewd, who has him secretly tutored in the arts of the assassin. For in Fitz's blood runs the magic Skill--and the darker knowledge of a child raised with the stable hounds and rejected by his family. As barbarous raiders ravage the coasts, Fitz is growing to manhood. Soon he will face his first dangerous, soul-shattering mission. And though some regard him as a threat to the throne, he may just be the key to the survival of the kingdom.

My husband told me I should listen to this series.
Foolish me. I thought it was a trilogy. Once I was invested in Fitz's life, I realized there are 16 books in this world and that Fitz is still very much present in the last book!
So what's the Farseer Trilogy about?
The main character, Fitz is born a bastard. Before the age of six, Fitz can't recall anything including his mother. His first memory is of his mother's father  (can't really call him a grandfather since he didn't act like one) taking him to his father's Royal Guard. Prince Chivalry was not there but his stablemaster, Burrich was.
For most people in the Six Duchies, it's shocking to learn that Prince Chivarly betrayed his wife since their marriage was one out of love than duty. Chivalry, who was King-in-Waiting, decides to exile with his wife, Patience without meeting Fitz. Chivalry's brother, Prince Verity becomes King-in-Waiting.
At first, when Fitz arrives, he sleeps with the dogs and creates a bond with one of them, Nosy. He speaks very little and he runs free after helping in the stables until the day King Shrewd notices him when he was shy of his tenth birthday. The King promises Fitz to feed him, clothe him in exchange for him being sworn to the Farseer line. Furthermore, King Shrewd wants Fitz to learn to become an assassin, and later he wants him to learn to Skill.

“You need not eat any man’s leavings. I will keep you, and I will keep you well. If any man or woman ever seeks to turn you against me by offering you more than I do, then come to me, and tell me of the offer, and I shall meet it. You will never find me a stingy man, nor be able to cite ill use as a reason for treason against me. Do you believe me, boy?”

The Farseer line has been blessed with the Skill, a way of communicating (like telepathy) but it also can force its will into someone's mind without their knowledge. There is also the Wit which is not spoken of and only a few know and have. It's a way of communicating with animals and sharing their minds (mind link). To have that power is seeing as a perversion by some.
Fitz, without really wanting to, has many enemies, including Prince Regal who will stop at anything until he can see that Fitz is dead. Furthermore, the kingdom does have a common enemy, the Red-Ship Raiders who are responsible for the Forged ones: Men and women who after being taken by the raiders, are returned without a conscience. The Forged ones will murder and destroy everything in their path.
I was happy with this first book in the trilogy. Robin Hobb creates an amazing fantasy world full of intrigue, treachery, and unforgettable characters. It has a slow pace and very few moments of action but it does set a good base for books to come.
As soon as I finished the Assassin Apprentice, I started listening to the next one, Royal Assassin.
Cliffhanger: No
4/5 Fangs
Posted by MrsLeif at 6:51 PM