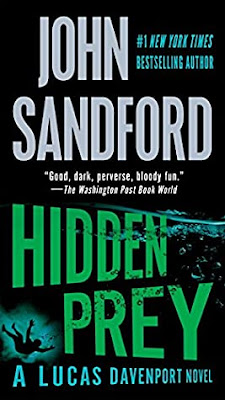 Theories abound when a Russian gets himself killed on the shore of Lake Superior--shot with fifty-year-old bullets. But when it turns out he had very high government connections, state troubleshooter Lucas Davenport gets the call. Well, Lucas and a mysterious Russian cop with secrets all her own. Together, they'll follow a trail back to another place and another time, and battle the shadows they discover there--shadows that turn out to be both very real and very deadly.

In Hidden Prey, Lucas is called in when a Russian is murdered. Bullets from a few decades ago have been used and it's not clear why this man was chosen.
The night of the murder, a witness saw it all and Lucas will try to figure out who this person is. At the same time, Russia sends their own investigator who will join forces with Lucas to find the murderer.
As the clues start coming in, Lucas has to wonder if there has been a Russian spy ring in the midwest all along?
Not my favorite in the series. I liked it because it is Lucas and I know he will find the murderer. It's never easy but I do trust that Lucas and Co, will catch the bad one (most of the time). Yes, sometimes they get away with it but you know that Lucas knows who they are and he will be watching and waiting for them to make a mistake.
Cliffhanger: No
3/5 Fangs
Posted by MrsLeif at 6:50 PM