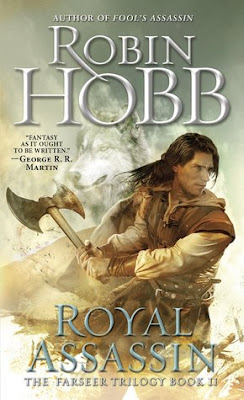 Fitz has survived his first hazardous mission as king’s assassin but is left little more than a cripple. Battered and bitter, he vows to abandon his oath to King Shrewd, remaining in the distant mountains. But love and events of terrible urgency draw him back to the court at Buckkeep, and into the deadly intrigues of the royal family.
Renewing their vicious attacks on the coast, the Red-Ship Raiders leave burned-out villages and demented victims in their wake. The kingdom is also under assault from within, as treachery threatens the throne of the ailing king. In this time of great danger, the fate of the kingdom may rest in Fitz’s hands—and his role in its salvation may require the ultimate sacrifice.

Royal Assassin begins just where Apprentice Assassin ended.
If you read the books you know what happened to Fitz. Suffice it to say, he didn't do so well on his first solo quest as an Assassin to help his King and King-in-Waiting, Verity. At least, the Six Duchies has gained a Queen-in-Waiting, Kettricken.
In the beginning, Fitz is not sure about himself. He was hurt during the events that happened a the end of book one and he's still recuperating. But Fitz must go back to Buckkeep not only because of his promise to his King but also because he wants to look for Molly, his friend.
When he gets to Buckkeep, King Shrewd is not himself. He looks sick. King-in-Waiting, Verity is trying to keep the raiders off the Six Duchies without much success. The one good piece of good news is that Molly is now working at Buckkeep. The bad news is that by him caring for her, he has painted a target on her back.
Fitz does make a new connection with an animal, NightEyes who becomes one of my favorite characters in this book (Just like I loved Nosy and Smithy).
In Royal Assassin, nothing really good happens to Fitz. He has the bad luck of being a bastard and having Regal as an enemy. His life is nothing but dangerous situations and people trying to kill him.
Despite things not going well for him, I did enjoy this book and so many of the characters have become dear to me, including Kettricken, Verity, NightEyes, The Fool, Patience, Lacey, and Burrich.
The ending of this book is quite sad in a way.
Cliffhanger: Yes
4/5 Fangs