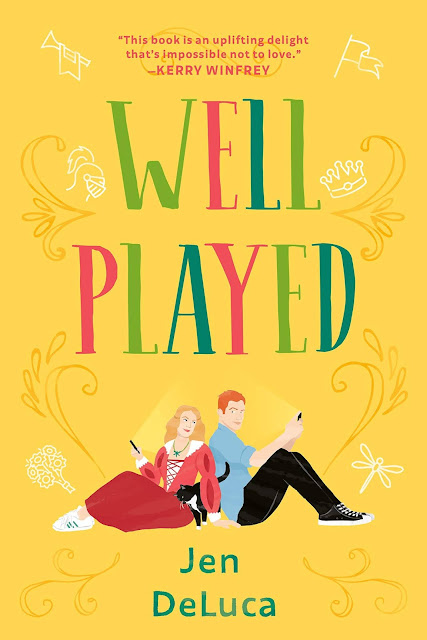 Stacey is jolted when her friends Simon and Emily get engaged. She knew she was putting her life on hold when she stayed in Willow Creek to care for her sick mother, but it's been years now, and even though Stacey loves spending her summers pouring drinks and flirting with patrons at the local Renaissance Faire, she wants more out of life. Stacey vows to have her life figured out by the time her friends get hitched at Faire next summer. Maybe she'll even find The One.

When Stacey imagined "The One," it never occurred to her that her summertime Faire fling, Dex MacLean, might fit the bill. While Dex is easy on the eyes onstage with his band The Dueling Kilts, Stacey has never felt an emotional connection with him. So when she receives a tender email from the typically monosyllabic hunk, she's not sure what to make of it.

Faire returns to Willow Creek, and Stacey comes face-to-face with the man with whom she’s exchanged hundreds of online messages over the past nine months. To Stacey's shock, it isn't Dex—she's been falling in love with a man she barely knows.

I enjoyed Well Met and immediately added Well Played to my TBR. After a few months, the wait was over and I was able to snatch an early copy of it. (Thank you Forever!!!).

For those who read Well Read, our heroine became good friends with Emily, the heroine of book 1. I liked her in Well Met. I thought she was straight forward and good support for Emily.

What I learned in this story is that Stacey never wanted to stay in a small town. She had dreams of leaving it and doing something else with her life. She stayed because her mother was sick. She was scared her mother will get sick again so it felt safer not to dream big.

The one thing Stacey looks forward to every year is when the Renaissance Faire comes to Willow Creek. She likes to wear her Faire costume, enjoys the men in kilts, the fake fights and the people, especially Dex Mac Lean, the singer of the Dueling Kilts.

After having a little too much to drink, she decides to comment on Dex's social media. Emily has decided she wants more than a yearly hookup. A Cyrano de Bergerac situation entails and another Mac Lean might end up stealing her heart.

I didn't love Well Played as much as I loved Well Met. I liked both main characters, Stacey and Daniel but I thought Daniel gave up too easily a couple of times instead of fighting for what he wanted.

One of my favorite parts of Well Played was to catch glimpses of Emily and Simon's love story and their wedding.

Will I read Well Matched when it comes out? ABSOLUTELY.  I really can't wait for April and Mitch.

A complimentary copy was provided by Forever via Netgalley in exchange for an honest review.
Posted by MrsLeif at 9:16 PM