Love Your Life by Sophie Kinsella 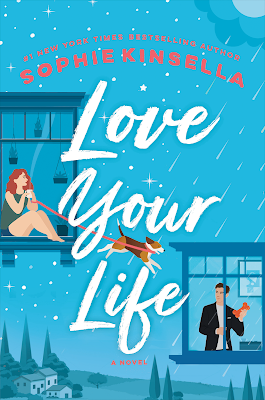 From the #1 New York Times bestselling author of I Owe You One, an utterly delightful novel about a woman who ditches her dating app for a writer's retreat in Italy--only to find that real love comes with its own filters.

Call Ava romantic, but she thinks love should be found in the real world, not on apps that filter men by height, job, or astrological sign. She believes in feelings, not algorithms. So after a recent breakup and dating app debacle, she decides to put love on hold and escapes to a remote writers' retreat in coastal Italy. She's determined to finish writing the novel she's been fantasizing about, even though it means leaving her close-knit group of friends and her precious dog, Harold, behind.

At the retreat, she's not allowed to use her real name or reveal any personal information. When the neighboring martial arts retreat is canceled and a few of its attendees join their small writing community, Ava, now going by "Aria," meets "Dutch," a man who seems too good to be true. The two embark on a baggage-free, whirlwind love affair, cliff-jumping into gem-colored Mediterranean waters and exploring the splendor of the Italian coast. Things seem to be perfect for Aria and Dutch.

But then their real identities--Ava and Matt--must return to London. As their fantasy starts to fade, they discover just how different their personal worlds are. From food choices to annoying habits to sauna etiquette . . . are they compatible in anything? And then there's the prickly situation with Matt's ex-girlfriend, who isn't too eager to let him go. As one mishap follows another, it seems while they love each other, they just can't love each other's lives. Can they reconcile their differences to find one life together?

Love Your Life or Ava-Land and Matt-Land was quite an entertaining and sweet novel. The end of the book left me with a big smile on my face.

Yet, the beginning of the book didn’t do it for me. I thought "oh no, this is an insta-love story" which is my least favorite. How wrong was I? Very. I ended up liking it quite a bit more than I thought.

Most surprisingly was that I liked all the main character's friends too. There is Nell who has some serious health issues but she doesn't play the martyr and she can be brutally honest. Sarika who only wants to date someone who lives close to her home (Too far away it's a deal-breaker). She’s using a dating app's algorithm to narrow the perfect guy for her. Then there's Maud who is impossible to say no to. When she asks you for a favor, you don't even realize you're agreeing to do it.  To avoid saying yes, it's best not to engage her.

On Matt's side, his friends and flatmates, Topher and Nihal were both amusing and in their own way, supportive of Ava. They were both good guys, Topher despite his antisocial personality and Nihal with his multiple robots.

Now, getting back to the main characters, the book begins with Ava. She likes to start multiple things at the same time but doesn't really finish any of them. Her new thing is she wants to write a book. She wants to write a historical romance novel and for this reason, she joins a writer's retreat in Italy. There she meets "Dutch" who's real name is Matt. Dutch was joining a martial arts retreat but after it gets canceled, he ends up in the writing one. Ava and Matt have a spark and soon they become an item. By the time a real name is needed, they discover they both live in London.

London changes everything for this couple. Going back to the real world reveals their huge differences. They don't seem to agree on anything including food (Ava is a vegetarian, Matt's a carnivore). There is also Ava's dog, Harold, who can destroy a shirt in ten seconds or disappear any good steak in a millisecond.

For me, the last third of the book is where the story shines. I liked the way Sophie Kinsella's characters in this Chic-Lit/RomCom novel resolved their issues in a full circle kinda away.

A complimentary copy was provided by Random House via Netgalley in exchange for an honest review.
Posted by MrsLeif at 4:22 PM