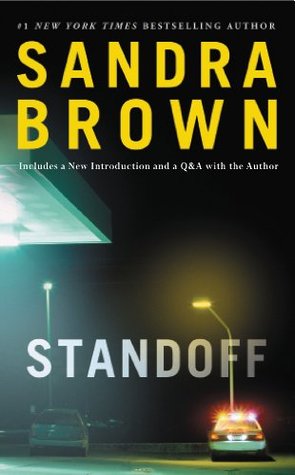 Ambitious TV reporter Tiel McCoy is driving through New Mexico when she hears over the radio that Sabra Dendy, the 17 year-old daughter of Fort Worth multimillionaire Russell Dendy, has been kidnapped. Tiel calls her editor and learns that Sara was "kidnapped" by her boyfriend Ronnie and is pregnant. Tiel is at a gas station store when an armed couple robs the cashier and orders all the customers to the floor. The girl goes into labor and Tiel realizes that she has a huge story on her hands. A tense standoff begins as the FBI and Russell Dendy wait outside. Tiel learns that Sabra and Ronnie are more afraid of her father-who plans to put the baby up for adoption-than of the FBI and would rather die together than surrender and be kept apart. Now it is more than just a story to Tiel as she fights to prevent these two kids from becoming a tragedy.

Standoff is a short story. It has six intense chapters. I couldn’t put it down!!

Tiel McCoy is a reporter. She is good at her job and she was on her way to a needed and well-deserved vacation when her boss tells her she might be close to the story of the year. A young man, Ronnie has abducted his girlfriend, Sabra. The girl’s father, Russel Dendy, who is a well-known millionaire, is furious. The cops are looking for them and Tiel is asked to interview Ronnie’s father who lives close to where Tiel is driving through.

Tiel stops by a convenience store to get something to eat, when a couple comes barging into the store and the young man has a gun, Tiel can’t believe her luck. Sabra and Ronnie is the couple everyone is looking for. More shocking for Tiel is to find out, Sabra is pregnant and ready for childbirth. Thankfully “Doc” is another one of the hostages and he seems to know what to do.

Can Tiel and Doc keep everyone safe before the FBI comes in and tragedy ensues?

I loved reading or listening to Sandra Brown’s books. They are all so good and the suspense is always great. With Standoff, I couldn’t turn the pages fast enough to learn more about Doc and the fate of Sabra and Ronnie.