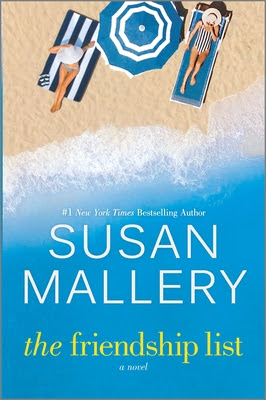 [ ] Wear a bikini in public

Single mom Ellen Fox couldn’t be more content—until she overhears her son saying he can’t go to his dream college because she needs him too much. If she wants him to live his best life, she has to convince him she’s living hers.

So Unity Leandre, her best friend since forever, creates a list of challenges to push Ellen out of her comfort zone. Unity will complete the list, too, but not because she needs to change. What’s wrong with a thirtysomething widow still sleeping in her late husband’s childhood bed?

The Friendship List begins as a way to make others believe they’re just fine. But somewhere between “wear three-inch heels” and “have sex with a gorgeous guy,” Ellen and Unity discover that life is meant to be lived with joy and abandon, in a story filled with humor, heartache and regrettable tattoos.

The Friendship List was so much fun to read!

Two friends each stuck in their past. Following self-imposed rules that shouldn't exist. Rules which stop them from living a full life.

Ellen Fox is a single mother. Her son is finishing high school and it is time to decide about picking a college. Ellen admits she doesn't want him to leave the nest until she realizes he is not even considering the college he wants because he feels responsible for her and he is willing to sacrifice his future for her.

Neither woman has dated recently. Ellen since she became a mother and Unity since the passing of her husband. They do have each other. They have been friends for many years and they support each other unconditionally.

Unity creates the Friendship List. A list of challenges for them to achieve including dating again. Unity writes it more for Ellen than for herself. She is not sure she wants to change at all.

The Friendship List was a charming and witty novel. The main characters Ellen, Unity, Keith, Thaddeus, Cooper, Lisa, and Dagmar were all well written and well developed.

I love Ellen's spontaneity with Keith. She also had a great relationship with her son, Cooper. She was probably my favorite character. A close second was Dagmar. Unity was lucky to have her.

Keith went a little too far with his daughter, Lisa. He went from caring for her to becoming too controlling for my taste.

I love Thaddeus. He was perfect. He was so patient and understanding. He was ready for a relationship and he played no games.

A complimentary copy was provided by HQN via Netgalley in exchange for an honest review.