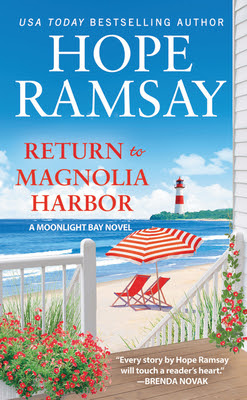 She never forgot him...but can she forgive him?

Jessica Blackwood is trying to make her architectural design firm a success, and she's off to a great start, thanks to a recommendation that leads to the job of the century-designing a house for a wealthy but reclusive bachelor. The only problem? Jessica's new client happens to be her old high school nemesis. The bigger problem? He's no longer the cocky boy who once tormented her, and suddenly she finds herself intrigued by her new client.

Christopher Martin isn't proud of his past behavior. He regrets nothing more than hurting Jessica all those years ago, and now that he's back in Magnolia Harbor he finally has a chance to make amends. As the two work side by side, Topher begins to realize he wants more than a house. He wants forgiveness and a future with the woman he's never forgotten. But can he prove to Jessica he's truly changed?

This is the third book in the Moonlight Bay series. I didn't read the first two books but I believe you can read them as a standalone without issues.

The story centers around Jessica Blackwood and Christopher Martin. It's loosely based in the retelling of Beauty and the Beast.

Jessica was forced to leave her town when she was a teenager. The town gossiped about her and another boy, Colton. People believe there was more to them being together than friendship. Now, as an adult, Jessica has come back to her hometown. Jessica is an architect and she is starting her own business. Recently, she has finished a project that has made an impact on the business.

Christopher has learned about the house she recently built. He wants to hire her to build his new home on an island away from all the noisy eyes. Christopher was in an accident and his handsome face is not so handsome anymore. The accident has left him with facial scars and a bad leg. The town people give him the "look" and he's done with it. He is also tired of his meddling family members telling him how to live and he just wants to be left in peace.

To Jessica and Topher's surprise, they seem to understand each other.

The question is, can Jessica and Christopher overcome their personal issues and develop a relationship?

There were parts of Return to Magnolia Harbor that I enjoyed. I like the idea of a retelling of Beauty and the Beast. I like the ghost and the treasure hunt storylines. I want to know where Colton's life is going and what is going to happen to Ashley and a certain minister. My issues were with Jessica. She appeared to be too scared at times and trying to run away from her troubles. I also didn't feel like the town apologized for all the gossip they threw around her life. It was disappointing. I like Topher and how he started to heal on the outside and the inside too.

A complimentary copy was provided by Forever in exchange for an honest review.