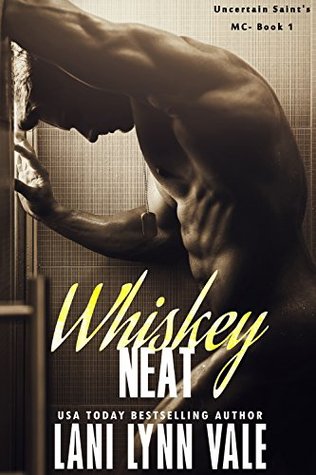 Griffin Storm wasn’t prone to violence, but when someone takes what Griffin holds dear, the world as he knows it is gone.

Retaliation, revenge and rage fuels him. His club, the Uncertain Saint’s MC, do their best to offer support, but Griffin is beyond redemption. He’ll do what he has to do. Kill who he has to kill.

He doesn’t care if that means he dies. If it gets him what he wants, then it’s worth it.

He fakes it all until the night he walks into a sex shop for batteries and lays eyes on a woman that will change his life.

Lenore makes him think past tomorrow. Makes him want to see just what the future might bring.

But his life’s a dangerous one built around pain and deception, and not for the faint of heart.

He won’t give up the past, not until he’s done what he promised to do.

And if that means she’s not there when the dust settles, he’ll risk it.

Lenore, though, won’t give up on him. She’ll fix him, whether he wants her to or not.

There is one line in this book that I didn't care for one bit. The hero says something nasty to the heroine. It made me quite unhappy with the story and its development. Other things I disliked were the pull/push coming from Griffin and the insta-love relationship between them. Saying that there were some scenes that were funny or/and interesting. The way the hero meets the heroine was entertaining. The epilogue was a good one.

Griffin Storm is a Texas Ranger. He's also part of the Uncertain Saints MC. Griffin was married and had a child, Tanner. Then one day someone kills his son and Griffin is out for revenge. He wants to find out who did it and why. He has no plans for developing a relationship.

Lenore Drew is content with her life. She is the proprietor of a sex toy shop. When she meets Griffin, her world is never normal again. It seems Griffin's son's murder was part of a bigger operation and now that Griffin is getting closer to the truth, the more dangerous her relationship with Griffin becomes.

Despite Whiskey Neat having great reviews, I can honestly say that I didn't like it. I know I'm in the minority so maybe you will enjoy it.