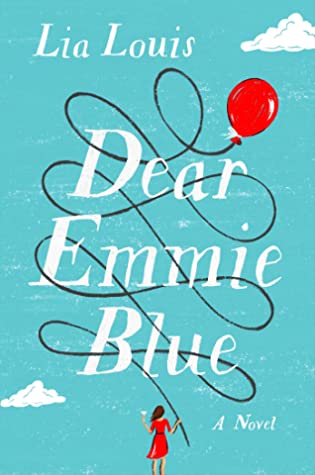 In this charming and poignant novel, teenager Emmie Blue releases a balloon with her email address and a big secret into the sky, only to fall head-over-heels for the boy who finds it; now, fourteen years later, the one thing Emmie has been counting on is gone for good, and everything she planned is up in the air.

At sixteen, Emmie Blue stood in the fields of her school and released a red balloon into the sky. Attached was her name, her email address…and a secret she desperately wanted to be free of. Weeks later, on a beach in France, Lucas Moreau discovered the balloon and immediately emailed the attached addressed, sparking an intense friendship between the two teens.

Now, fourteen years later, Emmie is hiding the fact that she’s desperately in love with Lucas. She has pinned all her hopes on him and waits patiently for him to finally admit that she’s the one for him. So dedicated to her love for Lucas, Emmie has all but neglected her life outside of this relationship—she’s given up the search for her absentee father, no longer tries to build bridges with her distant mother, and lives as a lodger to an old lady she barely knows after being laid off from her job. And when Lucas tells Emmie he has a big question to ask her, she’s convinced this is the moment he’ll reveal his feelings for her. But nothing in life ever quite goes as planned, does it?

Emmie Blue is about to learn everything she thinks she knows about life (and love) is just that: what she thinks she knows. Is there such thing as meant to be? Or is it true when they say that life is what happens when you are busy making other plans? A story filled with heart and humor, Dear Emmie Blue is perfect for fans of Eleanor Oliphant Is Completely Fine and Evvie Drake Starts Over

Guys, This is my favorite book so far this year!

Oh, the feels! So many feels. It was everything I wanted it to be.

As a lover of romance, Dear Emmie Blue melted my heart. My kindle is full of highlights. So many favorite one-liners <3.

So what's the book about?

I almost don't want to tell you. I want you to experience it yourself.

Emmie Blue is turning thirty. Her life is not where she envisioned it. Far from it. She is living in Louise's house. An older lady, who rents a room and is as quiet as Emmie. She's working at a hotel instead of working at a high school. She never met her father and her mother is as warm as a cactus (please forgive me cactuses for the comparison). Emmie's mother has been in and out of Emmie's life as far as she can remember.

Emmie's best friend is Lucas. The boy who found her balloon all those years back. The boy who knows her secret. The boy who is now a man and whom Emmie has fallen in love with without telling him. The man who shares her own birthday. The man she's waiting for him to notice he loves her back.

When Lucas asks Emmie to meet him in France (he lives there, she lives in the UK) for a special dinner, Emmie thinks this is it. He's finally going to pop the question. Yet, this is not what happens. Instead, her heart is broken. With the news he gives her, she knows things will change between them.

Dear Emmie Blue was a charming, endearing story with lovable characters. Ballon Boy stole my heart. At the 53% mark, I hit my forehead when I finally realized what my heart was telling me to be true.

The secondary characters were so well done. Rosie was the best girlfriend someone could have. Her sincerity, no-nonsense personality and her humor made her stellar. Fox's company complimented the trio well. Louise also found a place in my heart. She was a quiet presence until she wasn't anymore.

Dear Emmie Blue is a road to self-discovery for our main character, Emmie... A time to grow and do some needed soul-searching. To stand up and become stronger. To learn that despite adversity and a lousy past, you can be better. You can be happy ❤️❤️❤️

Thank you, thank you, Atria for sending me this book!

A complimentary copy was provided by Atria via Netgalley in exchange for an honest review.
Posted by MrsLeif at 7:20 PM