For Reasons Unknown by Michael Wood 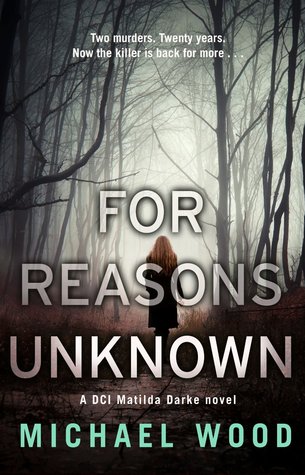 Two murders. Twenty years. Now the killer is back for more…

DCI Matilda Darke has returned to work after a nine month absence. A shadow of her former self, she is tasked with re-opening a cold case: the terrifyingly brutal murders of Miranda and Stefan Harkness. The only witness was their eleven-year-old son, Jonathan, who was too deeply traumatized to speak a word.

Then a dead body is discovered, and the investigation leads back to Matilda's case. Suddenly the past and present converge, and it seems a killer may have come back for more…

A darkly compelling debut crime novel. The start of a brilliant series, perfect for fans of Stuart MacBride, Val McDermid, and James Oswald.

A really good beginning to the series!

A cop down on her luck, a cold case, and a new murder. This particular mix was enough to keep my attention throughout the book.

Matilda Darke is coming back to work after a long absence and having had the most difficult time in her life. She has lost her husband and a prominent case she was working on went south. This has left her suffering from panic attacks and she has lost her self-confidence. Coming back to work after nine months only makes her anxiety less manageable. She questions herself. She's not sure she can still do her job. When her superior assigns her a twenty-year-old cold case, the Harkness murders, as her next investigation, her uncertainty about keeping her position as DCI doubles.

The Harkness case is well-known to the community. Miranda and Stefan Harkness were murdered around Christmastime. The only witness to the crime, a then eleven-year-old, Jonathan. Jonathan was so affected by what happened that night, that he stopped speaking. He was sent to live with his aunt.

In the present, Jonathan is now an adult. He has learned his childhood home is being demolished. He knows reporters will come back knocking and by Matilda investigating the case, he knows his anonymity is about to end.

Then a new murder occurs and the connection to the Harkness case is undeniable. The past and the present collide and it's up to Matilda to unearth the truth.

I was pleased by the start of the series. It was was a good storyline with interesting characters.
Matilda was such a broken character at the beginning. Her imperfections only make me like her more and I was rooting for her to succeed.

The rest of the team complemented her well. The doc was a true friend to Matilda. She was there for her. The drama inside the police station helped with the narrative instead of becoming a distraction.

I'm glad that there are more books already out. I can see my self reading the next one soon.