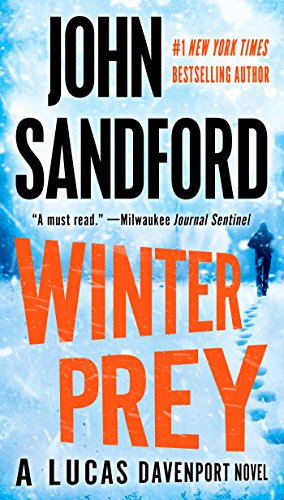 The Iceman is Lucas Davenport's most determined foe - a serial killer driven to cover his brutal tracks with blood. Sandford again creates almost unbearable suspense as we wait for the Ice Man's razor-sharp corn knife to strike.

Winter Prey unfolds in the cold and driving snow of the north country, the perfect setting for the chilling terror caused by the Ice Man, a killer who knows Lucas' every move - a coldly brilliant madman who can't be stopped. Turn up the heat and listen as Lucas Davenport faces his most dangerous challenge.

In Winter Prey, we have Lucas Davenport assisting the police with a murder case during a terrible winter in Wisconsin.

A family has been murdered and their house has been burnt. A photograph of a man and underage high school kid points to the reason for their demise. When the local Sheriff calls Lucas for help, he can't resist. Lucas is bored and his video games and life at the cabin are not enough to entertain him.

The baddie on this one goes by the name of the "Iceman". A cold-blooded killer who will stop at nothing until he can save himself from being discovered.

Lucas Davenport keeps on growing on me. He can be petulant, but he can be funny too. I love how in this one, Lucas meets a woman, Weather Karkinnen who seemed to be one step ahead of Lucas with her comebacks and sarcasm.

I also enjoyed (from the warmth of my home) how John Sandford makes winter a character in itself with freezing temperatures and winter storms making the chase for the killer even a more difficult one.