All She Wants for Christmas by Jaci Burton 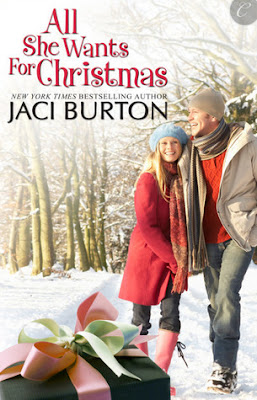 Country singer Riley Jensen would never have returned to her small Missouri hometown if her publicist hadn't come up with the scheme to tape a Christmas special there. So she never would have known that the man who broke her heart at eighteen—causing her to flee to Nashville—was now a widower with a seven-year-old daughter. Riley has ten years of angst-filled hit songs and Grammy awards to prove she doesn't need Ethan Kent. But suddenly, she can't help thinking of all she gave up by running away...

Ethan Kent knew Riley had the talent and the drive to make it as a singer. He also knew she wasn't going anywhere if she stayed in their nowhere town for him. Then one night and one huge mistake sent her running on the road to fame. Which doesn't mean he ever stopped loving her...

But with so much separating them, can Riley and Ethan find their way back together one magical country Christmas?

Book 1 of the Kent Brothers Trilogy.

Riley Jensen is coming back to her hometown of Deer Lake, one she thought she was never going to see again. She left it when she was eighteen and caught her boyfriend sleeping with her best friend, Amanda. She poured all her sadness into writing songs and became a huge Nashville star. Thanks to her publicist, she is back for a documentary on her life.

Ethan Kent is the proud father of a seven-year-old, Zoey. He would do anything for his daughter, including taking her to meet her music idol, Riley, the woman he lost when he made a terrible mistake. Ethan feels terrible about what happened with Amanda and Riley but he would not ever want to go back since his mistake lead to him becoming a father to Zoey. As a single parent, he tries his best to give his child the best of him but Ethan has never forgotten about the only woman he has loved and seeing Riley again, stirs too many feelings and hopes.

A sweet second chance romance perfect for the season. I thought Riley was quite forgiving and I truly believe Ethan was quite sorry for his mistake.

Besides the main couple, I absolutely loved Zoey. She was so cute and adorable. Points for Ethan for raising a sweet girl.