The Collectors by David Baldacci 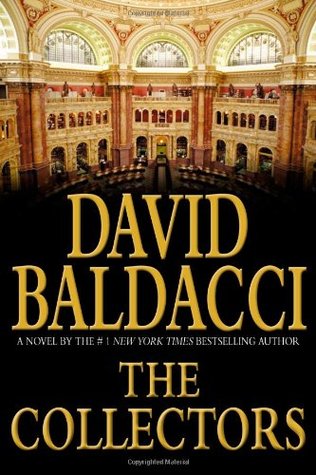 In Washington, D.C, where power is everything and too few have too much of it, four highly eccentric men with mysterious pasts call themselves the Camel Club. Their mission: find out what's really going on behind the closed doors of America's leaders.

The assassination of the U.S. Speaker of the House has shaken the nation. And the outrageous iconoclasts of the Camel Club have found a chilling connection with another death: the demise of the director of the Library of Congress's rare books room, whose body has been found in a locked vault where seemingly nothing could have harmed him.

A man who calls himself Oliver Stone is the groups unofficial leader. Staying one step ahead of his violent past and headquartered in a caretaker's cottage in Mt. Zion Cemetery, Stone, drawing on his vast experience and acute deductive powers, discovers that someone is selling America to its enemies one classified secret at a time. When Annabelle Conroy, the greatest con artist of her generation, struts onto the scene in high-heeled boots, the Camel Club gets a sexy new edge. And they'll need it, because the two murders are hurtling them into a world of high-stakes espionage that threatens to bring America to its knees.

From an ingenious con in Atlantic City tho the possible forgery of one of the rarest and most valuable books in America history, to a showdown of epic proportions in the very heart of the capitol, David Baldacci weaves a brilliant, white-knuckle tale of suspense in which every collector is searching for one missing prize: the one to die for...

The whole first half of The Collectors, I was thinking how are these two storylines going to connect? I was loving both of them on their own but wasn't sure where David Baldacci was going with it. When it finally happened I was like, wow I didn't see that coming.

The book begins with the murder of the Speaker of the House and then Caleb Shaw's boss, Jonathan DeHaven is also found dead in the Library of Congress's Rare Books room. When Caleb sees his boss's body, Caleb passes out. His three friends, Oliver Stone, Ruben Rhodes, and Milton Farb will go in search of the connection between these two very different set of deaths.

While the Camel Club is going in one direction, another plot emerges. We're introduced to sexy, smart, independent con artist, Annabelle Conroy who is recruiting a group of men for a con involving an Atlantic City casino owner by the name of Jerry Bagget. Jerry is well known for his lack of compassion and if it is up to him, anyone messing with his casino will pay with their own lives.

When the two stories collided,  I couldn't put the book down. Annabelle was a fantastic asset to the story- and to the Camel Club. I loved her. She created mystery, humor, intrigue, and suspense in every page she appeared. I wasn't a fan of the first book but with the addition of Annabelle and I'm all in. Good job Mr. Baldacci for launching this unforgettable character!

Even though one of the plot lines closes by the end of The Collectors, another one is left wide open, making it impossible for me not to grab the next one in this series.