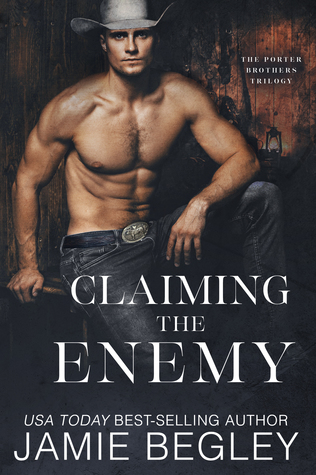 The Porter brothers were raised to live and die by Three Rules.


One, a Porter always keeps what’s his.


Two, a Porter stands his ground.
Three …
Dustin never had to search for his true love. They used to play and get in trouble together, shared a playpen, and their mothers used to be best friends. But that was before their fathers made them enemies and changed the course of their lives. Now the Porters stayed on their side of the mountain while the Hayes stayed on theirs.
Believing it was easier to coexist as frenemies with Jessie Hayes rather than changing the Porter stubborn ways, Dustin was content with booty calls, raising his son, and growing weed as a side business … until he heard her screams. Now he was going to show a murderer just how much they had underestimated this Porter brother. And he was going to have to break his father’s last rule: Leave no enemy standing … to claim the enemy that held his heart.

Excellent addition to the Porter trilogy!

I laughed and I cried reading it. Yet, again another book that made me cry while on a plane. My poor husband kept on asking me if I was alright. Thankfully, I was in the window seat, so no one else was privy to my madness.

Dustin is the youngest Porter brother. He has a son that he loves and a respectable business despite the reputation his family inherited. His dad was tough on him and his only friend growing up was Jessie Hayes. Jessie's dad and Dustin's dad hated each other and after a nasty event, Dustin broke off his relationship with Jessie for good.

Dustin, like his siblings, has something to hide. Something that only family and I guess the Last Riders know about him. Or maybe I should say that he has three secrets but I won't tell you those. What I can tell you, is that Dustin takes charge when Jessie goes missing after being brutally attacked and left for dead. I can tell you that he's extremely patient and careful with her and when the time comes, he will tell her exactly what he wants from her.

Jessie has always loved Dustin. She has followed his life, his happy and sad moments from afar and I felt sorry for her for not moving forward. I'm not sure I like the idea that a woman is pinning her life on a man and will wait forever for him despite not knowing if he cares for her. The only time I saw Jessie shine was at work or when she was firm with her brothers. I think those situations saved her from being a doormat.

One of the reasons why I continue reading the work of Jamie Begley is because of the huge character pool she has created. There are so many characters that I love and that I enjoy seeing them reappear even if it is a tiny cameo.

The one character who shined in this book was Greer. He has become one of my favorite characters in the series. I hope to see more of him in the Last Riders.