The Replacement Wife by Darby Kane 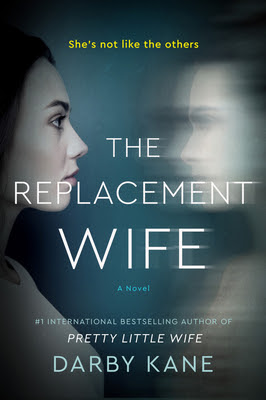 A domestic suspense novel that asks, how many wives and girlfriends should disappear before your family notices?
Elisa Wright is a mom and wife, living a nice, quiet life in a nice, quiet town. She’s also convinced her brother-in-law is a murderer. Josh has one dead wife and one missing fiancée, and though he grieved for them he starts dating someone new. Elisa fears for that woman’s safety, and she desperately wants to know what happened to her friend, Josh’s missing fiancée.
Searching for clues means investigating her own family. And she doesn’t like what she finds. A laptop filled with incriminating information. Other women.
But when Elisa becomes friends with Josh’s new girlfriend and starts to question things she thinks are true, Elisa wonders if the memories of a horrible incident a year ago have finally pushed her over the edge and Josh is really innocent. With so much at stake, Elisa fights off panic attacks and a strange illness. Is it a breakdown or something more? The race is on to get to the truth before another disappearance because there’s a killer in the family… or is there?

Once again, I found myself being on the polar opposite of the majority. I was so entertained by this one. I'm not sure if it was Elisa and her mind chaos or the audible which was fantastic!
Elisa Wright is a mother and a wife. Something horrible happened to her about a year ago and she is plagued by PTSD and anxiety attacks. She doesn't like to leave a certain radius around her home because she can get a panic attack. Elisa is also a good sister-in-law to Josh. Josh has been unlucky in love. His wife died and his fiancee, Abby, disappeared. Elisa likes to do nice things for him. She cares for him like a brother. She goes to his home to set up a cleaning appointment when she finds Abby's computer. In it, she finds incriminating information about Josh.
How to prove Josh is a serial killer when your mind can be playing tricks on you and paranoia can be part of your looming soon-to-happen breakdown?
Not easy to make it simple. Especially when your husband who is a vet (one positive on Harris) loves his brother Josh dearly and will never believe he has done anything wrong.
Then, Josh is dating a new woman, Rachel, who seems friendly enough. Elisa starts fearing for her life. She doesn't want another woman to succumb to his claws because no one is stopping Josh. Elisa knows she must prove beyond a reason of a doubt what monster he really is. Yet, she is plagued by doubts. Is he gaslighting her? and who is the red hair woman she sees everywhere?
I enjoyed the ride and despite thinking that Elisa should have done some things differently, like changing the locks in her home, I went with the flow.
Cliffhanger: No
4/5 Fangs
A complimentary copy was provided by William Morrow Paperbacks via Netgalley in exchange for an honest review.
Posted by MrsLeif at 5:03 PM