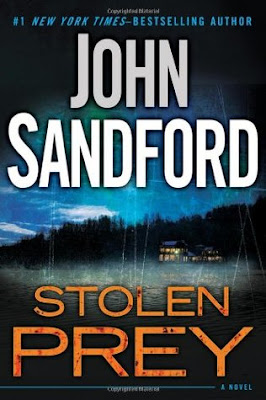 Lucas Davenport has seen many terrible murder scenes. This is one of the worst. In the small Minnesota town of Wayzata, an entire family has been killed—husband, wife, two daughters, dogs.
There’s something about the scene that pokes at Lucas’s cop instincts—it looks an awful lot like the kind of scorched-earth retribution he’s seen in drug killings sometimes. But this is a seriously upscale town, and the husband was an executive vice president at a big bank. It just doesn’t seem to fit.
Until it does. And where it leads Lucas will take him into the darkest nightmare of his life.

Not my favorite in this series but still engaging.
Stolen Prey begins with Lucas getting mugged. After jogging, he decides to stop by the ATM. He is robbed and in the process, he suffers a fractured wrist. He ends up with a cast he will need to wear for the next 3 months. As a reader, you know Lucas can't be happy about this. Lucas asks Virgil to find the culprits for him and he wants to know as soon as Virgil finds them, so he can be there for the arrest. Of course, each interaction between these two ends up making me smile.
At the same time, Lucas's time is going to be dedicated to a recent crime in a wealthy community. A family including the dogs has been tortured and killed. To Lucas, it smells like a Mexican cartel killing. He soon follows the crumbs and realizes that a bank might have been laundering money for a cartel and someone has stolen 22 million away from them. The cartel has sent 3 men, Uno, Dos, and Tres to find the robbers, dispose of them and get their money back.
Lucas has an idea of who took the 22 million, he just has to prove it while concurrently tracking the cartel killers and stopping them any way necessary.
Stolen Prey has the same humor and banter that I liked. I just wasn't crazy about the "baddies" in this one. They were not mentally challenging. I did like Letty at the end. She is sure Davenport's daughter more than his blood children are.
Cliffhanger: No
3.5/5 Fangs
Posted by MrsLeif at 5:13 PM