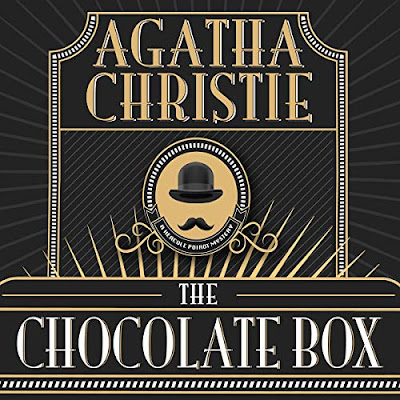 Poirot investigates a murder in which the only clue is a box of chocolates. This case took place in Brussels early in his career when he was a detective with the police force there. Likely before the start of the Great War. As far as we are aware, this is the earliest Poirot case!

This was just a taste of how amazing Agatha Cristie's imagination was.
Yes, we have read so many ways someone can be killed with thousands of thrillers out there but she was the one who jumped into writing mysteries with exotic characters and interesting plots. She gave the world Hercule Poirot and Miss Marple and the rest is history. After all, she is the Queen of Mystery.
The Chocolate Box is a short story featuring Hercule Poirot. In it, he is telling a friend which case was the one he didn't solve.
What, someone outsmarted him?
You might think it was impossible but in this audio, Poirot gets a dose of humility.
The audio is super short which was perfect for the small drive I had that day. Listening to it, made me want to read her books all over again. I read them as a teenager since my dad collected them. Some of her books are crystal clear in my mind but some I have forgotten.
Not for nothing, she is the best-selling female fiction writer of all time. Some might say she beat Shakespeare.
Cliffhanger: No
4/5 Fangs
Posted by MrsLeif at 4:46 PM