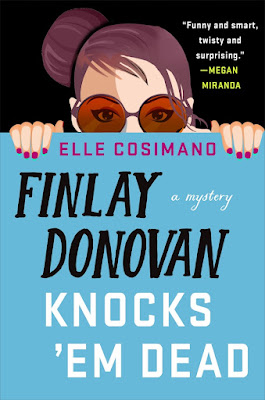 Finlay Donovan is―once again―struggling to finish her next novel and keep her head above water as a single mother of two. On the bright side, she has her live-in nanny and confidant Vero to rely on, and the only dead body she's dealt with lately is that of her daughter's pet goldfish.
On the not-so-bright side, someone out there wants her ex-husband, Steven, out of the picture. Permanently. Whatever else Steven maybe, he's a good father, but saving him will send her down a rabbit hole of hit-women disguised as soccer moms, and a little bit more involvement with the Russian mob than she'd like.
Meanwhile, Vero's keeping secrets and Detective Nick Anthony seems determined to get back into her life. He may be a hot cop, but Finlay's first priority is preventing her family from sleeping with the fishes... and if that means bending a few laws then so be it.
With her next book's deadline looming and an ex-husband to keep alive, Finlay is quickly coming to the end of her rope. She can only hope there isn't a noose at the end of it...

I loved the first book in the series, I thought it was a breath of fresh air. It was fun and had me laughing out loud multiple times. So it made perfect sense for me to want to read Finlay Donovan Knocks 'Em Dead.
If you read book one, you know it ended with Finlay finding out about a hit set up on her ex-husband, Steve. Steve might not be a good husband, fiancee, or boyfriend material but Finlay doesn't want him dead. Well, maybe a little and if was up to Vero, she would have given ideas to the killer on how to cause the most pain before killing him.
Naturally, Finlay and Vero embarked on an investigation to try to find out who is trying to off him. Ramon, Vero's cousin is there to help a few times. A young IT millennial is there to help them with the clues (but not for free). A wig is needed for a certain dangerous visit. We get to see more of Susan, Finlay's mom. A nice car makes an unexpected appearance and of course the crazy situations Finlay and Vero get themselves in are abundant.
I can honestly say that I liked it and I laughed with poor Finlay's absurd and fantastical adventures she got herself tangled up with but I didn't love it like I did the first one. Yet,  I was glad to see certain characters popping back in from the last book. I hope the trend continues.
What I did love was Finlay and Vero's friendship getting stronger despite certain secrets not being revealed. I want to know more about what happened to Vero before she met Finlay.
As for the love triangle, I like detective Nick Anthony but I still like the lawyer-to-be, Julian too. Decisions...decisions.
The next installment's path is set at the ending of this book. Can't wait for more Finlay and Vero shenanigans.
As for the narrator, Angela Dawe, Kudos!! She had me entertained all the way!
Cliffhanger: No
4/5 Fangs
A complimentary copy was provided by Minotaur Books via Netgalley in exchange for an honest review.
Posted by MrsLeif at 4:51 PM