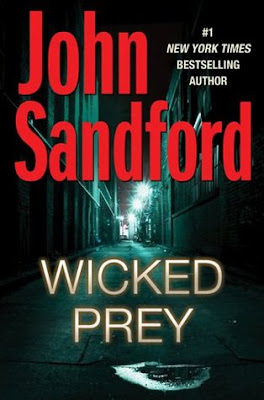 For twenty years, John Sandford's novels have been beloved for their "ingenious plots, vivid characters, crisp dialogue and endless surprises" ("The Washington Post"), and nowhere are those more in evidence than in the sudden twists and shocks of "Wicked Prey."
The Republicans are coming to St. Paul for their convention. Throwing a big party is supposed to be fun, but crashing the party are a few hard cases the police would rather stayed away. Chief among them is a crew of professional stickup men who've spotted several lucrative opportunities, ranging from political moneymen with briefcases full of cash to that armored-car warehouse with the weakness in its security system. All that's headache enough for Lucas Davenport-but what's about to hit him is even worse.
A while back, a stray bullet put a pimp and petty thief named Randy Whitcomb in a wheelchair, and, ever since, the man has been nursing his grudge into a full head of psychotic steam. He blames Davenport for the bullet, but it's no fun just shooting him. That wouldn't be painful enough. Not when Davenport has a pretty fourteen-year-old adopted daughter that Whitcomb can target instead. . . .
And then there's the young man with the .50 caliber sniper rifle and the right- wing-crazy background, roaming through a city filled with the most powerful politicians on earth. . . .

Another good addition to the series!
Lucas has his hands full with this one. The Republicans are in town for the National Convention and as part of his job, Lucas knows he has to keep everyone safe. As if this was not enough, Lucas gets info about a right-wing sharpshooter who is probably in town. Then, Lilly calls from New York, a squad of dangerous people might be heading his way. They have already killed cops. Finally a person from Lucas's past, Randy Whitcomb, the reason he had to leave the force so many years ago, is back. Randy wants revenge and he believes taking and hurting Letty, Lucas's daughter is the way to make him pay.
There is plenty of action in Wicked Prey. Sanford has made such a great character in Lucas. From me disliking him to loving him and wanting to read all of his books. Lucas has become a good friend. Someone I want to check in on. It is a treat to see how Lucas's life is evolving now that he is married and has kids. I also like his team. I was happy that Dell's life is also moving ahead too.
Can I say that I love Letty?
Did I think she made the wrong decisions? Yep. she did. I didn't agree with the way she handled the situation she was in. It was scary how much she reminded me of Lucas. She has the same darkness. She will do what needs to be done. Already, At her young age, she has lived way too much. She is an old soul.
Next for me is Storm Prey.
Cliffhanger: No
4/5
Posted by MrsLeif at 9:27 PM