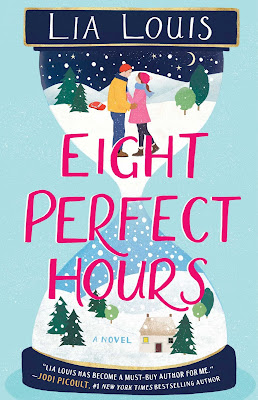 xxxIn this romantic and heartwarming novel, two strangers meet in chance circumstances during a blizzard and spend one perfect evening together, thinking they’ll never see each other again. But fate seems to have different plans.
On a snowy evening in March, 30-something Noelle Butterby is on her way back from an event at her old college when disaster strikes. With a blizzard closing off roads, she finds herself stranded, alone in her car, without food, drink, or a working charger for her phone. All seems lost until Sam Attwood, a handsome American stranger also trapped in a nearby car, knocks on her window and offers assistance. What follows is eight perfect hours together, until morning arrives and the roads finally clear.
The two strangers part, positive they’ll never see each other again, but fate, it seems, has a different plan. As the two keep serendipitously bumping into one another, they begin to realize that perhaps there truly is no such thing as coincidence. With plenty of charming twists and turns and Lia Louis’s “bold, standout voice” (Gillian McAllister, author of The Good Sister), Eight Perfect Hours is a gorgeously crafted novel that will make you believe in the power of fate.

My favorite romance novel of 2020 was Dear Emmie Blue, so of course, I wanted to read Eight Perfect Hours.
The book starts with our heroine, Noelle Butterby, feeling down after attending her class reunion where the items of the time capsule were retrieved. She was able to get her friend Daisy's letter but not the camera/film. She also saw her ex-boyfriend, Ed who tried to avoid contact with her. Now, she is stuck in the motorway with hundreds of cars and a blizzard is upon them. She has a dead cell phone and she knows her mother is probably freaking out.
Then, someone knocks on her window. The stranger, Sam Atwood, has been watching her and he is asking if she needs help. Noelle after some hesitance agrees to move to his car to charge her cellphone. After spending eight perfect hours together, they each go their own way without exchanging their contact info.
Noelle feels like her life is at a standstill. She would like to be a florist but she cleans houses instead. After the passing of her good friend, she went into a depression and after her mother suffered a stroke, her mother developed agoraphobia and doesn't like to be alone, so Noelle has to stay with her and can't make any plans. She does have a brother but he is an aspiring artist and he is never home. She does have the emotional support of her good friend, although she feels like her friend is hiding something. Then Ed is back in town. It would be so easy to get back together but she keeps on meeting Sam in the most unexpected ways!!
I blame Sam for me not loving this book. After their initial encounter, Sam didn't give me the vibe, he was head over heels for Noelle. He was for the most part trying to avoid her. He didn't want to believe in fate. I felt bad for Noelle who seemed to have fallen hard.
Overall, Eight Perfect Hours was a pleasant experience. I just wished I had connected with Sam better.
Would I read Lia Louis's next book? You better believe it!!
Cliffhanger: No
3/5 Fangs
A complimentary copy was provided by Atria/Emily Bestler Books via Netgalley in exchange for an honest review.
Posted by MrsLeif at 9:30 PM