The Cage by Bonnie Kistler 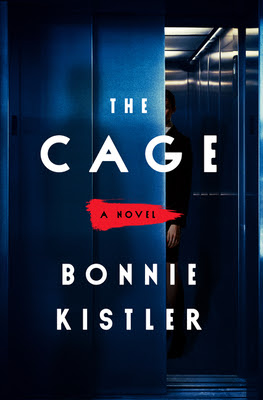 Combining the propulsive narrative drive of The Firm with the psychological complexity of The Silent Patient, a gripping and original thriller about two professional women--colleagues at an international fashion conglomerate--who enter an elevator together . . . but only one is alive when they reach the ground floor.
On a cold, misty Sunday night, two women are alone in the offices of fashion conglomerate Claudine de Martineau International. One is the company's human resources director. Impeccably dressed and perfectly coiffed, she sits at her desk and stares somberly out the window. Down the hall, her colleague, one of the company's lawyers, is buried under a pile of paperwork, frantically rushing to finish.
Leaving at the same time, the two women, each preoccupied by her own thoughts, enter the elevator that will take them down from the 30th floor.
When they arrive at the lobby, one of the women is dead. Was it murder or suicide?
An incredibly original novel that turns the office thriller on its head, The Cage is a wild ride that begins with a bang and picks up speed as it races to its dramatic end.

On a late Sunday, two women entered an elevator at work.
Lights go off.
When the power returns and the elevator gets down to the ground level, only one of them is alive.
Did Shay kill Lucy or did Lucy commit suicide?
This is the question The Cage is based on.
Shay Lambert can't believe what just happened to her. She is a lawyer who was working late. The dead woman's name was Lucy.  She was the head of Human Resources. Shay tells the police, Lucy had a gun and Shay was trying to take the gun away so Lucy wouldn't hurt herself.
Is Lucy speaking the truth?
Read it to find out.
It was fun trying to figure out what was really happening. Was Shay an unreliable narrator or was she being set up?
I liked Shay. She was down on her luck, with a marriage that was pretty much done and she was just trying to survive. I began rooting for her and wanting her to win even if she was guilty (where was my conscience?).
I usually stay away from legal thrillers but this one kept my attention throughout.
Cliffhanger: No
4/5 Fangs
A complimentary copy was provided by Harper via Netgalley in exchange for an honest review.
Posted by MrsLeif at 8:35 PM