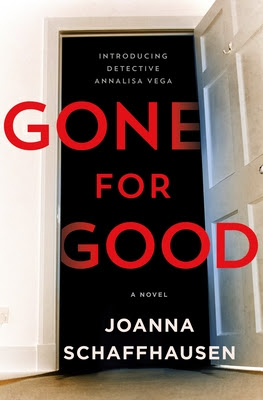 Gone For Good is the first in a new mystery series from award-winning author Joanna Schaffhausen, featuring Detective Annalisa Vega, in which a cold case heats up.
The Lovelorn Killer murdered seven women, ritually binding them and leaving them for dead before penning them gruesome love letters in the local papers. Then he disappeared, and after twenty years with no trace of him, many believe that he's gone for good.
Not Grace Harper. A grocery store manager by day, at night Grace uses her snooping skills as part of an amateur sleuth group. She believes the Lovelorn Killer is still living in the same neighborhoods that he hunted in, and if she can figure out how he selected his victims, she will have the key to his identity.
Detective Annalisa Vega lost someone she loved to the killer. Now she's at a murder scene with the worst kind of déjà vu: Grace Harper lies bound and dead on the floor, surrounded by clues to the biggest murder case that Chicago homicide never solved. Annalisa has the chance to make it right and to heal her family, but first, she has to figure out what Grace knew―how to see a killer who may be standing right in front of you. This means tracing his steps back to her childhood, peering into dark corners she hadn't acknowledged before, and learning that despite everything the killer took, she has still so much more to lose.

Gone for Good is an enjoyable thriller and I want more Annalisa Vega!
Detective Annalisa Vega is following in her father's footsteps. She is a cop just like him.
When the book begins, she has been assigned a new partner who turns out to be her ex-husband Nick Carelli. Their marriage didn't work but Annalisa knows she can't complain and she will have to work with him. She doesn't have a lot of time to process anything before she is called to the scene of a murder.
The victim is Grace Hopper. Grace, on her personal time, was part of an online group, The Grave Diggers, who review cold cases and try to find clues the police missed. Her latest interest was the Lovelorn Killer. Grace is murdered just like one of his victims. Annalisa realizes this and she knows it could mean that after twenty years, the person who killed her neighbor, Katie who was the mother of her boyfriend Collin, is back. She knows she must contact Collin who disappeared from her life after his mother's murder.
Everyone wants to know why, is the Lovelorn Killer back? Why did he stop for twenty years? Is this the work of a copycat? Annalisa doesn't believe that it is. She feels confident it's him! He is taunting her with phone calls and is following her. She could be his the next victim.....
I love Annalisa's character. She was strong and was ready to make the hard decisions. I also liked that despite Nick being her ex, they work well together. I liked Nick and I also like Collin who comes back because his mother's killer is back. I'm not sure which guy I will pick for Annalisa.
I guess we should see what happens to them on the next installment which I won't miss!
Cliffhanger: No
4/5 Fangs
A complimentary copy was provided by Minotaur Books via Netgalley in exchange for an honest review.
Posted by MrsLeif at 9:25 PM