The Road Trip by Beth O'Leary 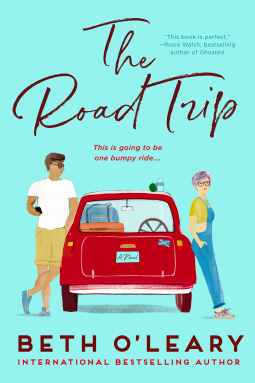 Two exes reach a new level of awkward when forced to take a road trip together in this endearing and humorous novel by the author of the international bestseller The Flatshare.
What if the end of the road is just the beginning?
Four years ago, Dylan and Addie fell in love under the Provence sun. Wealthy Oxford student Dylan was staying at his friend Cherry's enormous French villa; wild child Addie was spending her summer as the on-site caretaker. Two years ago, their relationship officially ended. They haven't spoken since.
Today, Dylan's and Addie's lives collide again. It's the day before Cherry's wedding, and Addie and Dylan crash cars at the start of the journey there. The car Dylan was driving is wrecked, and the wedding is in rural Scotland--he'll never get there on time by public transport.
So, along with Dylan's best friend, Addie's sister, and a random guy on Facebook who needed a ride, they squeeze into a space-challenged Mini and set off across Britain. Cramped into the same space, Dylan and Addie are forced to confront the choices they made that tore them apart--and ask themselves whether that final decision was the right one after all.

Is this the same author that gave us The Flatshare and The Switch?
It didn't feel that way to me.
Dylan and Marcus are driving towards their friend Cherry's wedding in Scotland when they hit the car in front. Of course, the car in front is driven by Dylan's ex-girlfriend, Addie.
Addie is also going to the wedding. Her sister, Beth is in the passenger seat and Rodney, a guy from the Facebook wedding group is in the back.
When Dylan's car ceases to work, Addie can't leave Dylan stranded. So both Dylan and Marcus join them in Addie's car. What follows is an uncomfortable trip for most of them.
I had 3 issues with The Road Trip.
First one: Connecting with the characters. I didn't like Dylan and hated his best friend, Marcus. Addie was not so bad but If I have to pick a favorite character, it would be Beth, Addie's sister. Beth was there for Addie every time she needed her. She also gave good advice and inserted humor into the story.
The second problem: Addie's reactions. It felt like Addie was in love with Dylan just a few hours after meeting Dylan. Then, in the present, just a few hours into the drive she was forgetting and sweeping under the rug all the bad times Dylan and Marcus have caused her.
Third, I didn't understand the necessity to include Rodneys's drama into the storyline. It felt it came out of nowhere and it didn't contribute to anything.
I felt disappointed that I didn't like it when I have loved her other books.
Sigh, Hopefully, I can connect with the next book.
Cliffhanger: No
2/5 Fangs
A complimentary copy was provided by Berkley via Netgalley in exchange for an honest review.
Posted by MrsLeif at 8:07 PM