Heard It in a Love Song by Tracey Garvis Graves 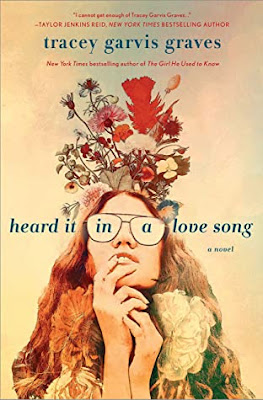 Love doesn’t always wait until you’re ready.
Layla Hilding is thirty-five and recently divorced. Struggling to break free from the past—her glory days as the lead singer in a band and a ten-year marriage to a man who never put her first—Layla’s newly found independence feels a lot like loneliness.
Then there’s Josh, the single dad whose daughter attends the elementary school where Layla teaches music. Recently separated, he’s still processing the end of his twenty-year marriage to his high school sweetheart. He chats with Layla every morning at school and finds himself thinking about her more and more.
Equally cautious and confused about dating in a world that favors apps over meeting organically, Layla and Josh decide to be friends with the potential for something more. Sounds sensible and way too simple—but when two people are on the rebound, is it heartbreak or happiness that’s a love song away?

As a huge fan of On the Island, I jumped at the opportunity of reading Heard It in a Love Song.
Layla is a thirty-five-old woman recently divorced. She is still healing, her divorce took a toll on her. Her ex-husband never supported her dream of becoming a professional singer so for all the years they were married, she had to give it up. Now, she has decided to sing for herself. She changes her basement and makes it her studio. A place where she can play her guitar and sing her music without a disapproving glance or an explanation needed.
Josh is an electrician. He recently separated from his high school sweetheart. He is in his 40s and has a daughter who is going to kindergarten. Josh shares custody and loves the time he spends with her. Yet, his free time is another matter. He would like to have someone he can share things with.
Layla works at the school. She is the music teacher. She's also at the receiving end of drop-off time at school. Here is where she starts interacting with Josh when he drops his daughter every morning. Soon thereafter, a friendship with potential ensues.
I liked the story. It's more about realizing what your dreams are and resuming them. It's also about moving forward after a failed relationship and rediscovering who you are on your own. Learning to enjoy the time alone.
I wouldn't call this a romance per se since I felt the romance was secondary at times. Both Layla and Josh were cautious despite their attraction. They knew they wanted to avoid making a mistake in their new relationship. I liked their growth from strangers to friends to something more.
Cliffhanger: No
4/5 Fangs
A complimentary copy was provided by St. Martin's Press via Netgalley in exchange for an honest review.
Posted by MrsLeif at 8:31 PM