Such a Quiet Place by Megan Miranda 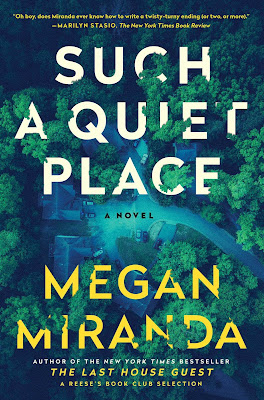 We had no warning that she’d come back.
Hollow’s Edge used to be a quiet place. A private and idyllic neighborhood where neighbors dropped in on neighbors, celebrated graduation and holiday parties together, and looked out for one another. But then came the murder of Brandon and Fiona Truett. A year and a half later, Hollow’s Edge is simmering. The residents are trapped, unable to sell their homes, confronted daily by the empty Truett house, and suffocated by their trial testimonies that implicated one of their own. Ruby Fletcher. And now, Ruby’s back.
With her conviction overturned, Ruby waltzes right back to Hollow’s Edge, and into the home she once shared with Harper Nash. Harper, five years older, has always treated Ruby like a wayward younger sister. But now she’s terrified. What possible good could come of Ruby returning to the scene of the crime? And how can she possibly turn her away, when she knows Ruby has nowhere to go?
Within days, suspicion spreads like a virus across Hollow’s Edge. It’s increasingly clear that not everyone told the truth about the night of the Truett’s murders. And when Harper begins receiving threatening notes, she realizes she has to uncover the truth before someone else becomes the killer’s next victim.

I wouldn't want to live in Hollow’s Edge. A place where everyone has a camera and policing the other neighbors' comings and goings are the usual.
No one should hate it more than Ruby Fletcher. While living in Hollow's Edge, the couple next door, Brandon and Fiona Truett are found murdered by carbon monoxide poisoning and the fingers were all pointed at Ruby.
During this time Ruby was living with Harper Nash who is the one who discovers the bodies. Ruby goes to prison but 14 months later, she is out on a technicality and what does Ruby do? She comes back to the scene of the crime and to the house, she shared with Harper.
The big question is why is Ruby back? Is she looking for revenge or absolution?
The story is told from Harper's point of view. She is older than Ruby and she liked her while living together before the murders. In the present, she is not sure what to think of Ruby. At times, is like time never passed and the friendship is there, at others she fears her.
This I will consider a slow burn. Starts slowly but picks up in the second half. I liked the mystery surrounding the deaths and also the real reason for Ruby's return. There is a good twist that propels the story forward and brings so many more questions to the table.
I liked Megan Miranda's work and I enjoyed Such a Quiet Place with its suspense and delivery.
Cliffhanger: No
3.5/5 Fangs
A complimentary copy was provided by Simon & Schuster via Netgalley in exchange for an honest review.
Posted by MrsLeif at 2:04 PM