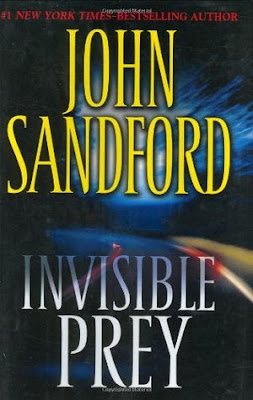 In the richest neighbourhood of Minneapolis, two elderly women lie murdered in their home, killed with a pipe, the rooms ransacked, only small items stolen. It's clearly a random break-in by someone looking for money to buy drugs. But as he looks more closely, Davenport begins to wonder if the items are actually so small or the victims so random, if there might not be some invisible agenda at work here. Gradually, a pattern begins to emerge — and it will lead Davenport to somewhere he never expected. Which is too bad, because the killers — and yes, there is more than one of them — the killers are expecting him.

Invisible Prey is another enjoyable book in the Lucas Davenport series.
The novel starts with two cases.
One is of an underage young woman who might have had a sexual relationship with a politician and Lucas is called to find out the truth and deal with the repercussions.
The second investigation is about an elderly woman and her maid found at home murdered in a gruesome way. At first, it looks like a simple burglary but soon it looks more like it's an antique robbery with the possibility that other murders might be connected to this case.
Lucas's hands are full. Time is ticking and he needs to solve the mystery before someone else dies.
I have learned to love Lucas and to root for him to catch the bad guys with the exception of Clara Rinker.
It's always great to be able to "see" Lucas working through the investigation, connecting leads, and understanding what makes the killers tick.
Invisible Prey has also a bonus in the form of John Sandford introducing the readers to his other series main character, Virgil Flowers.
I got to say that I'm intrigued about "F**cking Flowers" already.
Cliffhanger: No
4/5 Fangs
Posted by MrsLeif at 8:12 PM