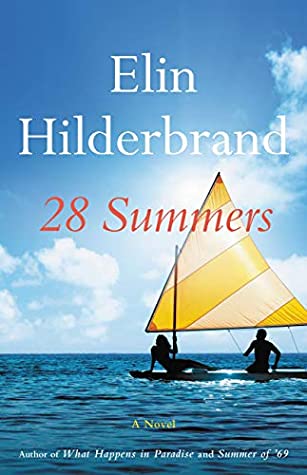 By the #1 New York Times bestselling author of Summer of '69: Their secret love affair has lasted for decades -- but this could be the summer that changes everything.

When Mallory Blessing's son, Link, receives deathbed instructions from his mother to call a number on a slip of paper in her desk drawer, he's not sure what to expect. But he certainly does not expect Jake McCloud to answer. It's the late spring of 2020 and Jake's wife, Ursula DeGournsey, is the frontrunner in the upcoming Presidential election.
There must be a mistake, Link thinks. How do Mallory and Jake know each other?

Flash back to the sweet summer of 1993: Mallory has just inherited a beachfront cottage on Nantucket from her aunt, and she agrees to host her brother's bachelor party. Cooper's friend from college, Jake McCloud, attends, and Jake and Mallory form a bond that will persevere -- through marriage, children, and Ursula's stratospheric political rise -- until Mallory learns she's dying.

Based on the classic film Same Time Next Year (which Mallory and Jake watch every summer), 28 Summers explores the agony and romance of a one-weekend-per-year affair and the dramatic ways this relationship complicates and enriches their lives, and the lives of the people they love.

Summer is here when Elin Hilderbrand has a new book out!

28 Summers is a different story and not my favorite one of hers.

I've some very mixed feelings about Jake McCloud. I got mad at him a lot of times. Why did he marry Ursula DeGournsey? More than half the time they had nothing in common. To me, he married a memory of a girl that at some point was nice.

Jake didn't respect his marriage or Ursula enough to tell her the truth and leave her or divorce her. I hated how glorified cheating was portrayed in this book. Jake cheats, Mallory cheats, Ursula cheats, Bear cheats.

How would you feel if you realized your partner has cheated every year since you have been together with someone else? Ursula didn't care except for Jake's actions affecting her career and the possibility of her becoming the next President of the USA.

It nagged me that Jake and Mallory never felt guilty of what they were doing. They just waited to see each other "Same Time Next Year" and family be damned. Their affair goes on so perfectly that Jake's daughter never learns her father is a cheater.

In addition, Jake and Mallory have a pact. A phone call telling the other one that a wedding or a child was coming. But, Mallory had to find out about Jake's wedding and child, not by Jake calling her or did I miss it?

I hated that Mallory was portrayed as flaky, commitment-phobic and insecure. Although, as a teacher she was great. I can see how the kids would love her. I liked that she loved her Nantucket home. She was happy with what she had. Me, not her, wanted more for her. She deserved so much more.

Now, why did I say I had mixed feelings about Jake at the beginning of my review? Because I really liked him during those first phone calls with Mallory. I like his fight for his sister's disease. I like that he came to see Mallory in the end (although, he waited one day instead of flying right that second).

I do love Elin's writing. I get to experience Nantucket through her eyes and summer through her words.

I hope her next book is a winner for me.