Always the Last to Know by Kristan Higgins 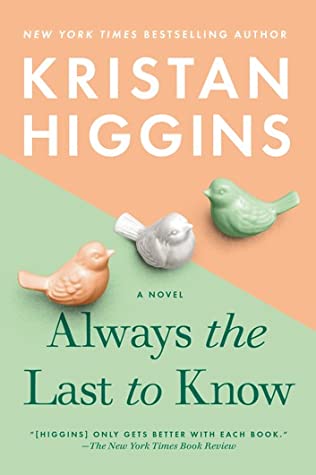 Sometimes you have to break a family to fix it.

From New York Times bestselling author Kristan Higgins, a new novel examining a family at the breaking point in all its messy, difficult, wonderful complexity.

The Frosts are a typical American family. Barb and John, married almost fifty years, are testy and bored with each other...who could blame them after all this time? At least they have their daughters-- Barb's favorite, the perfect, brilliant Juliet; and John's darling, the free-spirited Sadie. The girls themselves couldn't be more different, but at least they got along, more or less. It was fine. It was enough.

Until the day John had a stroke, and their house of cards came tumbling down.

Now Sadie has to put her career as a teacher and struggling artist in New York on hold to come back and care for her beloved dad--and face the love of her life, whose heart she broke, and who broke hers. Now Juliet has to wonder if people will notice that despite her perfect career as a successful architect, her perfect marriage to a charming Brit, and her two perfect daughters, she's spending an increasing amount of time in the closet having panic attacks.

And now Barb and John will finally have to face what's been going on in their marriage all along.

From the author of Good Luck with That and Life and Other Inconveniences comes a new novel of heartbreaking truths and hilarious honesty about what family really means.

Wow, another Women’s Fiction winner for Kristan Higgins!
I wait every year for Kristan Higgins's new book. I even delay reading them because I want to savor the moment and that way, it is less time for me to wait for her next release.
It’s always a real pleasure immersing in her stories. There is always something that clicks with me.

Always the Last to Know, wasn't an exception. It made me laugh and it made me cry.

Once I read the first few pages,  I knew the next few hours would be centered around one family: The Frost Family.

There is John, the patriarch who has been a good provider but not a very good father to his first child or a good husband to Barb, his wife.  The day he has a massive brain bleed, Barbara finds out something he has been hiding from her.
Barbara, the wife and mother, who has never been truly happy in her marriage despite trying to do things she assumed were expected of her as a "wife". She has a great relationship with her daughter Juliet but the same couldn't be said about her youngest daughter, Sadie. Sadie has always been John's favorite.
Juliet is a successful architect but lately, she has noticed she has competition at work from someone she brought in and tried to mentor. She also worries about her own marriage and her two girls especially the one who's becoming a typical teenager.
Lastly, we meet Sadie. A New Yorker by heart. Someone who didn’t want to stay and live in a small town. Her dream was to be discovered as an artist and become a famous painter. In the present, she's almost engaged to Alexander Mitchum, who’s a yacht salesman but her main love has been always been Jon snow, I mean scratch that,  Noah Pelletier. Noah had a different dream than hers. He wanted to stay in town, marry Saddie and form a family together.
The trials and tribulations of these characters were perfectly described by Kristan Higgins. She humanized them and gave them meaning. I ended up liking all three women in a very different way. Of course, I love Noah and Sadie together and I laughed every single time Mickey spoked. She had me in stitches. Barbara and Caro's friendship was a refreshing change. I also love how awesome Juliet's husband, Oliver really was.
I'm sad to say goodbye to this family but I'm sure next year, I'll meet some awesome new ones.
Cliffhanger: No
4/5 Fangs


A complimentary copy was provided by Berkley via Netgalley in exchange for an honest review.
Posted by MrsLeif at 10:44 AM