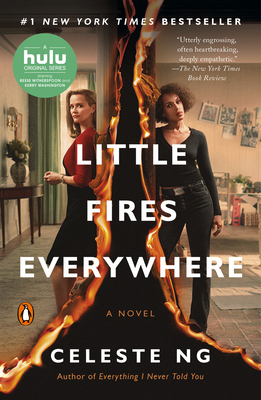 In Shaker Heights, a placid, progressive suburb of Cleveland, everything is planned – from the layout of the winding roads, to the colors of the houses, to the successful lives its residents will go on to lead. And no one embodies this spirit more than Elena Richardson, whose guiding principle is playing by the rules.

Enter Mia Warren – an enigmatic artist and single mother – who arrives in this idyllic bubble with her teenaged daughter Pearl, and rents a house from the Richardsons. Soon Mia and Pearl become more than tenants: all four Richardson children are drawn to the mother-daughter pair. But Mia carries with her a mysterious past and a disregard for the status quo that threatens to upend this carefully ordered community.

When old family friends of the Richardsons attempt to adopt a Chinese-American baby, a custody battle erupts that dramatically divides the town--and puts Mia and Elena on opposing sides. Suspicious of Mia and her motives, Elena is determined to uncover the secrets in Mia's past. But her obsession will come at unexpected and devastating costs.

Little Fires Everywhere explores the weight of secrets, the nature of art and identity, and the ferocious pull of motherhood – and the danger of believing that following the rules can avert disaster.

A really good story! Not a perfect ending but quite good just the same.

Little Fires Everywhere follows two very different women. One living in the cookie-cutter world of Shaker-Heights. Following all rules and regulations. Another one, seeming to be living a carefree life. She's a nomad going from city to city, getting inspiration and augmenting her artistic talent as she travels.

Mrs. Richardson is a wife, a mother of four, and a writer for the local newspaper. She is well-known and well-liked. Her marriage is solid and her relationship with her kids is a good one except for the one with her youngest daughter, Izzy.

Mia Warren is an artist. She and her daughter Pearl (who's 15) move around quite often. They have lived in many cities and states. Recently, Pearl has asked Mia to settle down for a bit. To let her enjoy high school and make new friends. Mia agrees to try.

Mia and Helena's world collide capriciously. Mrs. Richardson is intrigued and resentful at the same time of a woman like Mia. Despite her reservations, she rents her a rental property and offers her a job at her house as a housekeeper.

Mia was working for a restaurant but she feels like she can't say no to such an offer. She will still be able to create art in her free time. It would also give her the chance to keep an eye on Pearl who develops a fast friendship with Helena's son, Moody, then Lexie (the other daughter) and a crush on the oldest son, Trip.

Little Fires Everywhere had a cast of captivating topics and characters. Entertaining and thought-provoking.  Celeste Ng has a true talent with words.

Now, I want to watch the TV series.