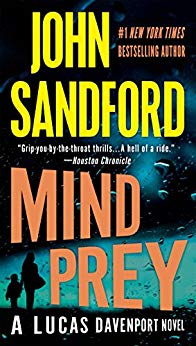 It was raining when psychiatrist Andi Manette left the parent-teacher conference with her two young daughters, and she was distracted. She barely noticed the red van parked beside her, barely noticed the van door slide open as they dashed up to the car. The last thing she did notice was the hand reaching out for her and the voice from out of the past — and then the three of them were gone.

Hours later, deputy chief Lucas Davenport stood in the parking lot, a blood-stained shoe in his hand, the ground stained pink around him, and knew that this would be one of the worst cases he'd ever been on. With an urgency born of dread, he presses the attack, while in an isolated farmhouse, Andi Manette does the same, summoning all her skills to battle an obsessed captor. She knows the man who has taken her and her daughters, knows there is a chink in his armor, if only she can find it. But for both her and Davenport, time is already running out.

John Sandford's novels have always been extraordinary for their harrowing twists, unforgettable characters, and crackling prose. But Mind Prey tops them all. It is the work of a true master.

By far, this one is my favorite book in this series. It has non-stop action. The psycho was a very disturbed monster who gave Lucas a run for his money.

In Mind Prey, Deputy Chief Lucas Davenport is assigned to the abduction of Andi Mannette and her two daughters, Genevieve and Grace.

Andi Manette comes from money, she's also married to money. Her husband George Dunn is rich and powerful and so is her father, Tower Manette. Andi is a prominent psychiatrist who shares a practice with Dr. Nancy Wolfe. When Andi and her daughters are taken after a conference at the girls' school, the abduction becomes a high profile case and Lucas is called in to help solve it.

The perpetrator is all types of crazy. John Mail is a violent man who’s obsessed with Andi. Andi treated him when he was twelve and she sent him away. He never forgot her and became obsessed with her. When he gets the chance at having her, he doesn't think twice.

John is a gamer and he has played Lucas's games. He knows who Lucas is and he believes he's playing a game with Lucas and Lucas is losing since he has the women and Lucas can't find him. Taunting Lucas and calling him on a regular basis is making the game even better.

As a subplot, Lucas is thinking about proposing to Weather Karkinnen, his girlfriend. He carries the engagement ring with him all over the place. He plays with it without realizing it. He's still unsure if he wants to commit or not.

Mind Prey was a sick book. John was a rapist, a sadist, a monster. He was hateful and I wanted nothing more than for Lucas to find him and shoot him dead.

I was satisfied with the ending and the twists. Also, with the resolution of the subplot.