Dreams Made Flesh by Anne Bishop 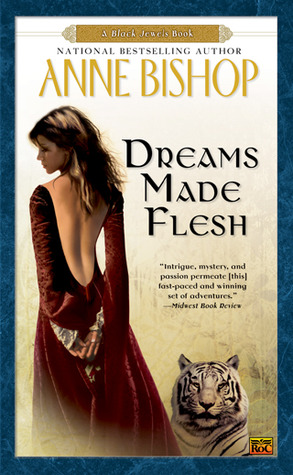 Return to the realm of the Blood in Dreams Made Flesh—featuring four revelatory all-new adventures of Jaenelle and her kindred….

Jaenelle is the most powerful Witch ever known, centuries of hopes and dreams made flesh at last. She has forged ties with three of the realm’s mightiest Blood warriors: Saetan, the High Lord of Hell, who trains Jaenelle in magic and adopts her as his daughter; Lucivar, the winged Eyrien warlord who becomes her protector; and the near-immortal Daemon born to be Witch’s lover. Jaenelle has assumed her rightful place as Queen of the Darkness and restored order and peace to the realms…but at a terrible cost.

In Dreams Made Flesh, discover the origin of the mystical Jewels, and experience the forbidden passion between Lucivar and a simple hearth witch. Witness the clash between Saetan and a Priestess that may forever change reality. And learn whether the sacrifice of Jaenelle’s magic has destroyed any hope of happiness between her and Daemon.

There are four short stories in Dreams Made Flesh.

The first story, Weaver of Dreams features the Spider spinning her web and how and who gifted them with magic.

In the second one, The Prince of Ebon Rih, Lucivar is the main character, In this story, we learned how he met and fell in love with Marian, his wife.

The third one, Zuulaman is all about Saetan. Is narrated in the past. Saetan is still married to Hekatah and he has a son with her and another one on the way. In this one, you learn of the power Saetan has and how scheming and evil Heketah really is.

The fourth one, Kaeleer’s Heart, belongs to Daemon and Jaenelle. This short story happens after the events of the Queen of Darkness. A woman has decided that Daemon must be hers and she would do anything to get him. Mistakenly, she believes Daemon is staying with Jaenelle for duty and not love or attraction. Jaenelle is still recuperating and while weak, she is getting better day by day. She's just having trouble with any of the men around her to understanding that she's ready to

I like the last 3 stories. Weavers of Dreams is too short to offer an opinion.

I love romance, so Marion and Lucivar's love story was good with just the right amount of drama to enjoy it. I got to see another facet of Lucivar. One where he tries to be romantic but at the same time showing Marian how to defend herself instead of recurring to violence.

Zuulaman gave me a better understanding of the power of Saetan. It reinforced the love he had for his family and how when push comes to shove, he'll do whatever is necessary.

Jaenelle and Daemon's story wouldn't be as great without Surreal. She steals most of the scenes.

Overall, I liked it.