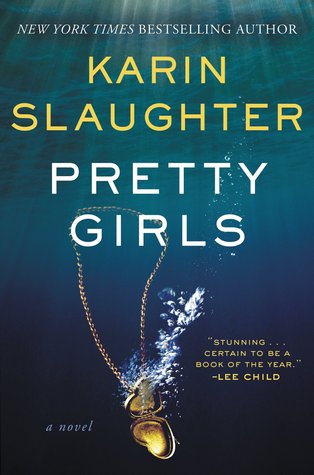 Twenty years ago Claire Scott's eldest sister, Julia, went missing. No one knew where she went - no note, no body. It was a mystery that was never solved and it tore her family apart.

Now another girl has disappeared, with chilling echoes of the past. And it seems that she might not be the only one.

But when she begins to learn the truth about her sister, she is confronted with a shocking discovery, and nothing will ever be the same...

I'm sad to say that I must cheat on Will Trent. Will's books have been my favorite until now. Pretty Girls was perfection. The suspense was absolutely killing me. I started the audio on a drive and by the end of the four-hour drive, I had to switch to the book. The audio was not fast enough for me. There were things I wanted to know but I was scared of waiting for. So I did something I never do. I look for spoilers. Sadly for me, the questions I needed an answer for were not in the spoilers I read.

Pretty Girls has an awesome twist. One I didn't see coming. Smaller twists were also there but I was able to guess them earlier on. Karin Slaughter spindles a story so perfect that you're unable to walk away from it, even for a second. I was glued to it. Nothing was more important than finishing her novel. Karin writes a malevolous psychopath. Such a sordid story that gave me a sour taste in my mouth. There are some scenes involving the psychopath and his victims that were very hard to read.

I hope Karin Slaughter is nice and sweet in real life because her mind is freaking twisted. It was hard to listen to some of the things the masked man does to the women he captures. If I could have skipped those parts, I would have (It's kind of hard to skip parts when you're driving on the interstate).

In Pretty Girls, Karin gives us the story of the Carroll family. We have Sam, the father. We have Helen, the mother and three sisters: Julia, Lydia and Claire. When Julia goes missing in 1991, the family breaks. Sam becomes obsessed with finding his daughter's kidnapper. He's unable to give up and Helen can't watch him self-destruct. She divorces him. Lydia turns to drugs and sex while Claire tries to be perceived as not existent.

Twenty years later, a new girl has gone missing and something happens in Claire's life that forces her to seek Lydia's help. The sisters' relationship has been estranged for many years. What follows is the unraveling of the mystery surrounding Julia's disappearance and a deception so shocking, it will stay in my mind forever.

Earlier on, I talked about spoilers which I needed to know. Well, if someone is looking for them, I'll post them here:

Sam is killed by Paul. Nolan is a good guy. Adam is not part of it. Paul doesn't rape Lydia. Claire kills Paul. Paul is the masked man.

Pretty Girls was exciting, nail-biting, gruesome, and a terrifying novel. It was hard to read it at times. Yet, I couldn't put it down.