Deception and Chaos by S.M. Soto 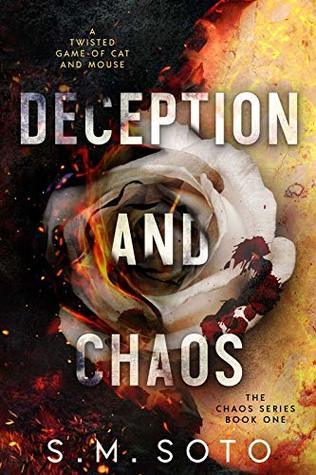 Sophia Cova lived a quiet, normal life, shadowed in sadness after the loss of her parents in a tragic airline accident. With her older brother being her only living relative and her anchor, Sophia is sure she’s destined for a brighter future. But that was until she was taken.

Stolen from her mundane, orderly life, she was drugged, and woke to every woman’s worst nightmare.

With only four grimy basement walls and a rancid mattress, she loses her sense of time, and preserves what’s left of her dignity by hurtling herself into the safety of her mind. The men, the beatings, they come and go with no reaction, until she hears one word that sends an arctic chill through her body. Sold.

On the eve of Sophia’s bidding, at one of the largest sexual slavery rings in the world, all hell breaks loose in the mansion of horrors. Gunfire and screams erupt all around her, as panic rises.

Snatched by one monster only to be taken by another, Sophia slowly starts to learn that not everything is as it seems. When secrets unravel, and the twisted game of cat and mouse ensues, The Puppeteer pulls his favorite strings and chaos brews.

Lives are lost while the clock ticks, and only time will tell who will be killed next…

More and more we hear about cases of human trafficking around us. Women and children go missing every day. Taken from their homes and families to never be seen again. We know this evil exists. We know humans are sold as sex slaves so it doesn't surprise me that we see more authors writing their books with this plot in mind.

Sophia Cova is a 24-year-old woman who after being drugged and kidnapped outside her home, wakes up in a different country. Her new home is a dark basement where strange men speaking a strange language are there to hurt her. Hurt her in ways she didn't realize it was possible. They want to break her. They want to sell her to the highest bidder. But, just when the auction is about to begin, she's rescued by a group of men.

Creed (Diavolo Sabella) is a mercenary. He and his group of men are working for the American government. Most commonly, their missions end with the bad guys dying at their hands. They will stop at nothing. When their recent mission encounters Sophia, a strange situation presents. Sophia is not an unknown victim. Sophia is the sister of Garrett, one of the men in Creed's team. This will complicate everything, beginning with his attraction to Sophia to knowing someone wants her back.

Deception and Chaos had good characters but I found too much of it quite predictable. I knew who the bad guy was very early on. It didn't surprise me. I also had a problem with how easy Sophia got over being taken and abused. Then, she jumps into a romantic relationship with Creed which she initiates constantly. Someone with her amount of trauma, wouldn't want ANY man close to her. Worse, she's surrounded with multiple deadly big guys and she's completely comfortable with them.

I'm reading the second book next. I do want to know how the story unfolds.