Blood and Chaos by S.M. Soto 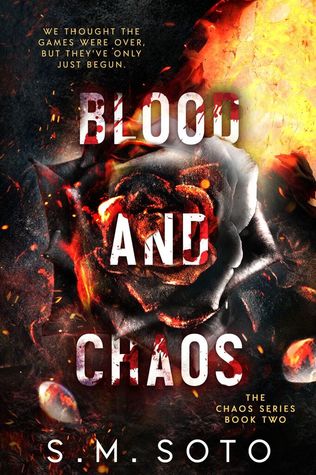 We thought the games were over, but they've only just begun...

She was the puppet.
He pulled the strings.
Now the death toll is rising, what could this mean?
It was all a game.
Of feelings.
Of pain.
Death is just an illusion, or so they say.
She was just a pawn on a piece of his demented board. But there's only one question left to settle the score…Can dead people really stay dead?

Blood and Chaos is the second book in the Chaos series. Deception and Chaos ended in a cliffhanger. The story picks up just where its predecessor finished.

Sophia has been taken by Finlay. He reveals to her all the planning he did to be able to kidnap her. We learn how deranged he really is. He's unstable and quite crazy. Sophia is devastated and she believes she has lost it all. Although, she feels like she still has a part of Creed with her.

For his part, Creed is going to his mobster family for help. His father Mateo agrees to help him find Sophia but at a price. A price Creed agrees to pay. Anything to find Sophia, the woman he loves.

Will Sophia and Creed reunite? Will Finlay cause trouble for this couple? Will being part of a mobster family scare Sophia away?  Luckily all these questions will be answered in this book. The only problem is that this one also ends in a cliffhanger.

Blood and Chaos had multiple points of views. We have Sophia's, Creed and even Garrett has a small one. There is more action than in Deception and Chaos. There is romance, violence, deceit and danger everywhere. I enjoyed parts of it but other parts of it left me disappointed. I just don't think Sophia's character is realistic. She has been tortured for months, almost sold as a sex slave and later on kidnapped AGAIN. She has been slapped, punched, verbally abused and she doesn't look like a woman who has gone through all of these. She's ready to have a romance and move forward without any issues. Yes, she mentions she can remember everything that happened to her but it doesn't show in the way she behaves.