Be Mine, Sweetheart by Codi Gary 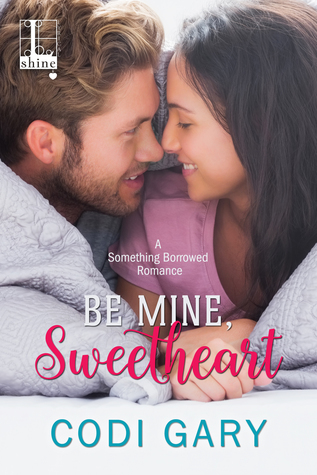 Kelly Barrow, the founder of Something Borrowed, didn’t get the happily ever after she counted on, but she considers herself fortunate anyway. After all, she has a thriving business and a loving family and friends. Yet ten years after her heartbreak, surrounded by couples in love, she knows it’s time to move on—and the gorgeous actor who hires her for his sister’s wedding seems like the perfect opportunity. There’s just one problem. Her best friend and legal counsel, Christian Ryan, keeps getting in her way . . .


Chris has been a shoulder to lean on since they were kids, and Kelly never expected him to interfere in her dating life. She doesn’t realize that over the years, Chris’s feelings have grown beyond friendship. The timing just never seemed right—until now. And as the two of them work through the wedding’s inevitable surprises and disasters, Kelly begins to wonder if she’s been looking for love in the exact wrong place . .

Kelly Barrow and Christian Ryan have been friends for a long time. When they were teenagers, Christian approached her and told her, his best friend Ray liked her. She told him to tell Ray to tell her himself. This was the beginning of their friendship. Kelly fell for Ray and a few years later, Ray asked her to marry him. Of course, she said yes. Regrettably, the wedding never happened. Ray died while on tour in the middle east, leaving behind Kelly and Christian and their grief.

Fast forward fifteen years and Kelly is the owner of Something Borrowed. She loves her job but she's starting to feel lonely. She's thinking it's time to start dating. She opens a profile on a dating website and to her dismay, her first date is a bust.

Christian is now a successful lawyer. He handles the business contracts for Something Borrowed. He dates but never seems to find the right gal. He's true constant is Kelly. They do everything together. They have movie nights and they text each other constantly. To Christian's surprise, he gets upset when he discovers Kelly is about to start dating again. He doesn't understand his feelings but when the actor Hank Townsend shows a definite interest in Kelly, he can't stand it.

Be Mine, Sweetheart is a Friends to Lovers novel. One that had the right ingredients to make it sweet and sexy at the same time. I enjoyed Kelly and Christian's camaraderie, banter and friendship. I got a kick out of their shock when they realized they wanted more.

I wonder if they'll be another book in this series. I think there's potential for one more couple.