Fallen Too Far (Too Far #1) by Abbi Glines 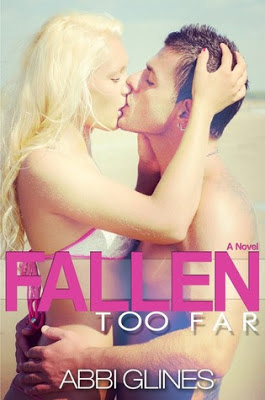 Blaire Wynn has lost everything. Her mother passed away from cancer and Blaire has to sell everything she has including her home to pay the bills. She leaves Alabama to meet her father. He left them and he has a new wife. They live in Florida. But, when she gets there her father has gone to Paris with his new wife. Nothing prepares Blaire to meeting Rush Finlay, her stepbrother. He is the son of a rich and famous rock star, and has tons of money. At the beginning his is extremely rude and arrogant. He lets her stay at his house but in a little room under the stairs which is for a maid.

Blaire's plan is to get a job to raise enough money to move out. She starts working at the Country Club. She makes friends. She is very attracted to Rush. Rush doesn't hide that he uses girls for sex. A different one every day. He tries to stay away from Blaire, but her innocence is pulling him closer to her. He feels protective and possessive of her. His sister Nan is awful to Blaire.

At some point they give in to their attraction. Unfortunately, there is a big secret that gets revealed.

Blaire is hurt beyond repair. And we end with a cliffy.

I love Abbi Glines' writing. She has become one of my 'must buy' authors.

4/5 Fangs (had to take one fang off for the cliffhanger)
Posted by MrsLeif at 8:31 PM