Confessions of an Improper Bride by Jennifer Haymore 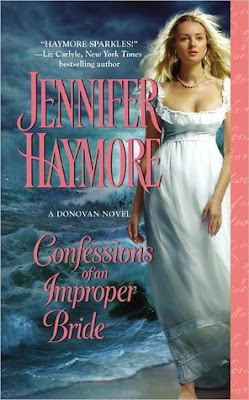 Serena Donovan is back in London after six years. The last time she was in London her reputation was compromised and while going home to the Islands her twin (Meg) dies in a ship accident.

Years later Serena is forced by her mother to travel to London assuming her sister's identity and is engaged to be married.

To Serena's surprise, the man who ruined her reputation is a good friend of her fiancee. She thought she had stopped loving Jonathan Dane but one look at him and the memories come back.

Jonathan, now Earl of Stratford can avoid feeling attracted to his friend's fiancee. Is it because "Meg" reminds him of Serena, whom everyone thinks is dead? Or is she? He knows there is something more to this woman and he will not stop until he figures it out.

It was an easy read. The romance is believable.